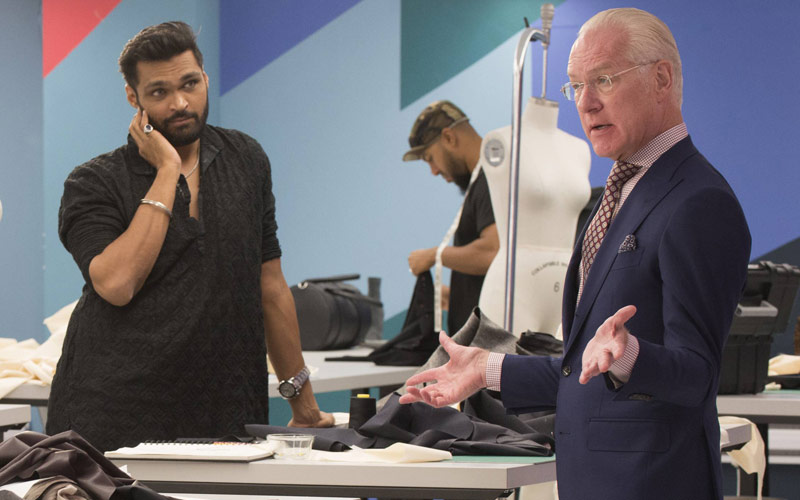 One of the many highlights of Project Runway 14's episode "Crew's All In" was Tim Gunn chewing out Swapnil Shinde. (Photo by Barbara Nitke/Lifetime)

There’s something about Project Runway recently that has made it feel a little lifeless and listless. Maybe it was the move away out the city to a studio. Maybe it’s the casting. Or maybe it’s just the nature of this reality competition: Throughout its life, it has dipped into mediocrity (a weak start on Lifetime; a terrible final season on Bravo) and ascended to greatness (starting with seasons one and two).

This season has some potentially interesting designers, but they are all presented in a way that is so very one-note it feels like nothing changes episode to episode: Swapnil’s laziness. Ashley’s self-doubt. Kelly’s not-right-for-high-fashion quirkiness.

The season feels weighed down somehow, like it’s just on the floor and doesn’t want to get up.

But even in weak seasons, the show is capable of perking up, and it did that last night, thanks in part to angry Tim Gunn to over-it Zach Posen. Even the Lifetime synergy guest judges, UnREAL stars Shiri Appleby and Constance Zimmer, did well—Appleby was actually a harsher critic than the regular judges, perhaps because she’s not used to the relatively mediocre work that keeps finding its way down the runway this season.

But I digress: it was a good episode!

Yes, the challenge was sponsored by a show sponsor, Sally Beauty, which already wastes too much of our time with its in-show ads. I fast-forward right through the consultations now, because they are just excuses to show off products while the designer stands there with a look on their face that seems to say, Can I go back to working now? Or must I continue this charade? It continued on the runway, where the judges stumbled all over themselves to praise the hair and makeup, though it certainly was better than some models’ clothes.

An old standby challenge returned this week: the designers had to work with non-models and create clothes for them. The twist this season was that the models were actual members of the show’s crew. The fourth wall came down as cameras showed other cameras and gaggles of producers and production assistants behind them.

Having the Project Runway crew serve as clients/models for the designers initially felt like the laziest thing ever, just another regrettable decision this season. Who are we going to use for the normal women challenge? I know, let’s just grab those people standing around and use them! We won’t have to bring anyone in or pay any money!

But the result was pretty terrific, and that was largely due to those crew members who often eclipsed their designers with their bright personalities. For example:

They were a lot of fun to watch during their consultations and fittings, though one has to wonder how much they were encouraged to be strong-willed.

Alas, the work was pretty terrible overall, minus Kelly and Merline. Ashley bombed her opportunity to create plus-sized clothes, creating the least-flattering thing ever for her model, an outfit which had tiny ruffled skirts that looked like a kid’s swimsuit.

The judges were so disappointed that they threatened to eliminate two people, and for a moment I thought they were going to eliminate Ashley, just to force Tim Gunn to use his save—is he ever going to use it? But they were just pretending, and both Ashley and Candice were safe.

It was Swapnil who was finally sent home. The judges’ critique of his work offered a rare opportunity for me to yell out, Yes, Zach Posen, yes! when he basically rolled his eyes at Swapnil, literally and verbally. “This judge is getting very bored,” he said, speaking for all viewers, too. Nina Garcia called his work “all surface.”

But Swapnil received the most criticism and anger from Tim Gunn, who’d clearly had enough of having to deal with such a talented yet profoundly lazy designer.

Tim wasn’t happy overall—“Why is this so disabling?” he said to Ashley, who was crying yet again in the workroom, before telling all the designers, “I have a fundamental lack of understanding about why this is so difficult for each of you.” So he let them have it, from pointing out Edmund’s “built-in camel toe” and telling Candice that he was “so profoundly underwhelmed” with her work because “you have taken all of the spice out of your work and delivered a bowl of oatmeal.” As if that wasn’t enough of a burn, he compared her work to H&M. Burn!

Before he even got to his consultation with Swapnil, Tim Gunn put the designer on notice. In his best teacher voice, Tim Gunn chided Swapnil, who was standing around doing nothing, as usual: “Why do you look like you’re waiting for something to happen?”

Because that’s exactly what Swapnil was doing. “What have you been doing for a full day plus three hours?” Tim Gunn asked during the consultation. “You’ve had hours and hours.” When Swapnil attempted an excuse, Tim Gunn lost it:

Let’s revel in that for a few moments, or maybe until this season ends: