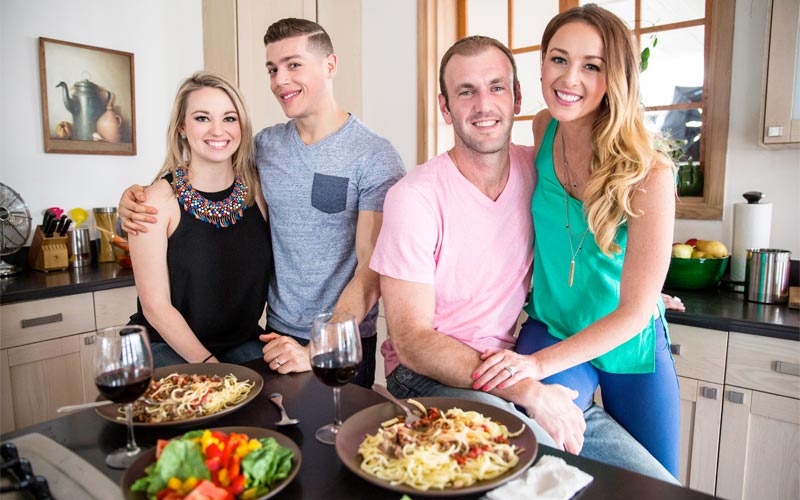 More than a year after getting Married at First Sight, the cast—Cortney Hendrix, Jassion Carrion, Doug Hehner, and Jamie Otis—is still smiling for cameras. (Photo by Karolina Wojtasik/FYI)

More than a year ago, six people did the unthinkable: they married strangers on television, and the result was not only compelling reality TV, but also two successful relationships that have lasted 18 months.

Jamie Otis and Doug Hehner, and Cortney Hendrix and Jason Carrion, are still living their married lives—and cameras are still documenting them.

When they return to TV on Married at First Sight: The First Year Tuesday night on FYI, there will also be a third couple, maybe.

Jason’s friend, Neph Rodriguez, is in a relationship with a woman he met when Jason and Cortney renewed their vows in Las Vegas, and she’s apparently moving across the country to be with him.

Considering Married at First Sight‘s season-one couples are beloved by fans–Jaime told me they are “such amazing, beautiful supporters”–but also face their own challenges. And considering that season two relationships ended disastrously, I wondered if the couples felt any added pressure to prove to their fans and the world that this experiment can really work.

Jamie agreed: “At the end of the day, my happiness and Doug’s happiness, that’s what matters.” Both couples have experienced lows recently, and Jamie told me, “Be patient with us. We’re just human beings. When we struggle and make mistakes, it’s multiplied.”

Cortney told me, “we’re all a work in progress, but we’re really working.” She added: “Don’t write us off yet.”

A clip from season two’s premiere

The first season premiere touches on some of those lows, but one of the highs is a fun moment when Jason attempts Cortney’s craft.

Cortney has returned to work as a makeup artist, doing makeup for film, TV, theater, and events, as you’ll see in this exclusive preview clip from the premiere.