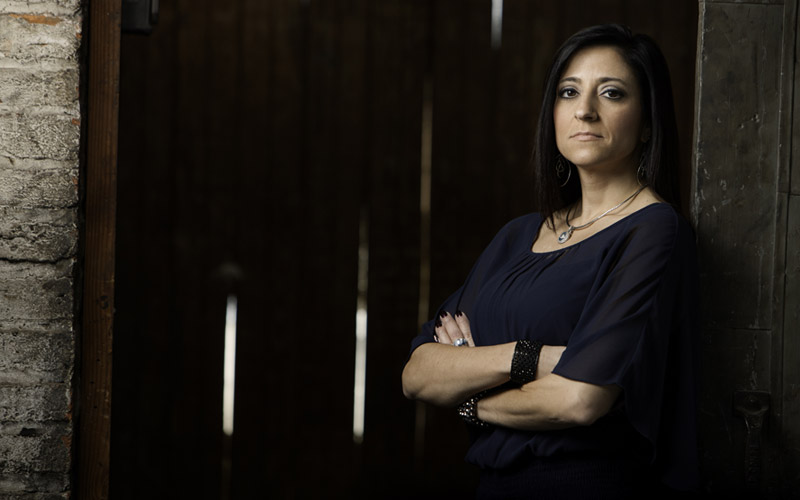 Ghost Hunters will introduce a new team member next week: Shari Ventura, who joins the show in its 10th season as a guest investigator for three episodes that were all filmed late in 2014.

Shari has known the Syfy series’ star, Jason Hawes, “for many years,” she told me. When Jason asked her to join the TAPS team for the show, she said yes because “I love how they do their investigations: it’s always how I do investigations.”

What that means for her is that TAPS doesn’t just assume everything is paranormal from the beginning. “I love how they go to a property, they do a lot of the disproving first. So it’s not that they go in there and they just assume that it’s haunted and they just go for it,” she told me. “They do a lot of debunking or disproving and they try to do a lot of the scientific stuff, and they try to really figure out what is going on, and they decide to do the regular investigating,” such as “trying to communicate.”

“It’s not that they jump to conclusions; when they talk to the clients, it’s very calming,” Shari added. “They’re very down-to-earth. This is what it is. I just like the whole process.”

She praised the TAPS members repeatedly, saying, “They work as a team. There’s no competition, there’s no exaggeration, everything is what it is. They made me feel like a part of the team from day one. They’re very helpful; everybody respects everybody.”

Although she’s new to the team, Shari has been doing paranormal investigations since she was 25, when fear of her own home lead her to investigate. Now, she does that both as a hobby and for clients—and on reality television.

How Ghost Hunters investigations are filmed

Investigations on the Syfy series, which is currently in the middle of its 10th season (Wednesdays at 9 p.m. ET), span several nights, though the episodes edit everything into what appears to be a single night.

A longer investigation is necessary, Shari said, because something may not happen on the first night. “It’s kind of like fishing; you never know what you’re going to get,” she said. Before the team starts any kind of investigation or even sets up, the team gets their bearings to make sure that they’ll be able to be safe when lights are off and they’re wandering around at night.

Once filming begins, there’s one camera operator with each team member or pair, but the sound mixer stays outside. Shari told me that the crew members “are very quiet” and it’s now as if “they’re not even there any more” for her. However, like the TAPS team members, the Ghost Hunters reality show crew can sometimes be responsible for errant noises, and the reality show crew will tag that so that it’s not confused for something unexplainable later.

“Absolutely the first thing that I do is to go in and try to disprove all the claims,” Shari told me. “The first thing absolutely is to go in and try to recreate what they were claiming. That’s the first thing that I would like to do. I’m not saying that we’re just disproving it so that’s it, so it’s not a ghost. We’re just saying this could be another thing. You try to go around and disprove as much as you can, but then we also will later on do the EVPs and just ask” and “try to get some answers from who it is.”

In her first episode, which airs Nov. 4, there are several examples of this, where the investigators realize that things such as sounds and circles of light have identifiable, non-paranormal sources.

“We do disprove number one, but we also like to see if there is something going on,” Shari said. “And, of course, we ask as many questions as possible.” Those questions are being asked of potential ghosts, asking them to communicate in some way to confirm their identity or intent. “If we do disprove a lot of the stuff, it doesn’t mean we’re saying, ‘It’s not haunted.'”

Does Shari believe in the paranormal? “Absolutely,” she said. “I do believe that a lot of these places do have paranormal things going on. However, some of the claims over the years, I’ve realized that a lot of people do see more things than what are actually happening. For example, if somebody was touched, they might think, ‘oh my god, somebody pushed me.'” She says it’s important to “listen to the claim” and then not let that affect the investigation.

Despite wandering through reportedly haunted places in the dark at night, attempting to communicate with dead people, Shari is nervous about only one thing: watching her first episode next Wednesday, which she hasn’t yet seen. “I’ve never been on TV,” she said.