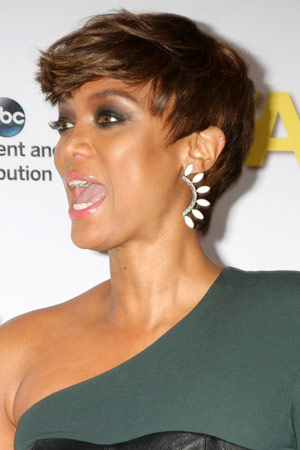 The CW has cancelled its long-running reality series America’s Next Top Model. It will end on Dec. 4 with the conclusion of its 22nd cycle, as the show calls its seasons.

The show debuted in 2003, and is the first of the major network legacy reality series to be cancelled.

Over its 12-year life, it spanned two networks, UPN and The CW, at the time a new network that it launched. The series also gave us many memorable moments, including Tyra’s epic takedown of Tiffany, and introduced the world to new vocabulary words such as “smize.” Recent seasons have included male models as the show has struggled to stay fresh, though Tyra did her best to publicize the show. (I’m kidding about that last part. Here’s why.)

The smize may go on but the show will not

Tyra hinted at the show’s end in August, giving a noncommittal answer that said the show “may be coming to an end soon.” Today, she acted as if it was her idea, writing on Twitter,

Thinking #ANTM22 should be our last cycle. I truly believe it’s time. May your pics be forever fierce. Keep on Smizing!

As Deadline reported, however, “the network has opted not to pick up a 23rd cycle.” CW president Mark Pedowitz said in a statement that the series “was a successful franchise for two networks” and added, “I want to thank Tyra and Ken for all their years of success in establishing a show that was not just popular in the U.S., but all across the world.”

On Instagram, Tyra posted a longer statement about the show’s conclusion. She makes some excellent points here about what the show accomplished, from its effect on the modeling industry to the way it often embraced imperfection. Heres’ the full statement:

Thinking #ANTM #cycle22 should be our last cycle. Yeah, I truly believe it’s time. Our diehard fans know we’ve expanded the definition of beauty, presented what Flawsome is, tooched and booched and boom boom boomed, shown the world how to show their neck, rocked couture/catalogue/commercial poses, have found our (and your) light, strutted countless runways, gone on tons of go-sees, added guys to the girls mix, and have traveled around the globe and back again. Yeah, it’s time. It really is. Wow, I am SO proud of what Top Model has done.

#ANTM brought the intimidating modeling world to the masses. We were the first reality show based in the fashion world. I never thought my little idea would have people everywhere thinking differently about how they take photos. And I never thought we’d do 22 cycles. Whoa! So many!!! And what rhymes with 22? You. And you and you and you and you! YOU made Top Model what it is. We are a global force that has so many international versions around the world because of YOU! That’s amazing and beyond anything that I ever dreamed.

I set out to create a show where Perfect is Boring. So I hope you continue to love your freckles, your moles, your big forehead, your big eyes, your small eyes, your pointy chin, your tiny boobs, your full chest, your ivory or ebony skin (or every color in between) – the stuff about you that makes you well…you. And I hope you’ve learned a heck of a lot from watching. I have an inkling you have. May your photos (and selfies) be forever fierce. May you always find your light. And may you werk hallways like runways. Always remember, you are beautiful & BOOTYful. And please, keep on Smizing each and every day for TyTy.