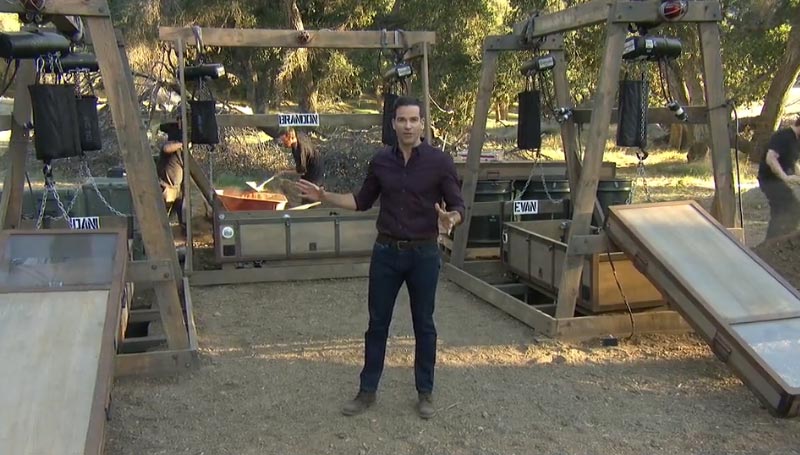 Burying people in these coffins wasn't as dramatic or sensational as you'd expect, but there were some fun moments.

The scariest thing about Fear: Buried Alive may have been how difficult it is to produce compelling live television. Thanks to the unpredictability of real people, however, the special turned out to be a lot better—and less sensational—than I thought it would be.

The first hour of the two-hour special was quite flat. Even putting people in coffins and lowering them six feet underground did not make for great entertainment. The production design did its best to make buried people look interesting. From camera angles to the nighttime lightning, it was all very well-done, as were the clip packages between segments that told stories of people actually buried alive. The coffins themselves were plain, but there was a decent look inside them with different camera angles.

Managing live television was, it turns out, the scariest part, and there was a lot of chaotic cross-talk between the hosts and the participants.

The sociologist co-host, Dr. Margee Kerr, is “a nationally recognized expert on professional haunted houses,” according to the bio on her new book, Scream: Chilling Adventures in the Science of Fear. She attempted to provide context and rationale, but it felt super-thin. (There was very little useful information that came from all the graphs and charts the camera kept focusing on; it might as well have been Star Trek-style Christmas lights behind a console.)

When some fear did creep in for the participants, Dr. Kerr struggled to communicate with them, and couldn’t even effectively instruct one of them on relaxation breathing.

Buried alive, having fun, until the snakes, rats, and bugs show up

The three contestants were actually calm, even jovial, for a long time, leaving Dr. Kerr to try to explain why. The producers’ attempt to scare the participants by cutting off audio communication with each other had essentially no effect, nor did tightening their restraints, which one person already removed so he could move around.

After about 75 minutes, the special came to life: producers dropped a snake in the coffin of the participant who’s been terrified of snakes and enclosed spaces since he fell in a well as a kid and was bitten by a snake. However harmless the snake might have been, it terrified him:

After Brandon’s first clearly audible “fuck,” producers cut the audio, which meant an extended period of silence.  When they finally unmuted him, guess what he said again? “Fuck” yeah. In the meantime, he tore through his restraints (which he’d previously removed and then put back on), threatened to kill the snake, and seemed to dislodge a camera.

Later, he eventually tapped out, panicking and demanded to be let out, repeatedly pressing the panic button, which did absolutely nothing. Naturally, all of this happened during a commercial. We were shown some of it on a replay, which included another uncensored “fuck.”

Of the five attempts at demonstrating primal fears, all fell flat except that one. The other two participants didn’t have quite the heightened reaction that Brandon did, but waiting around for something to drop on him did seem to at least concern Evan.

Even the final primal fear, annihilation or fear of death, didn’t really scare them. Dani’s coffin dropped some dirt on her to make her think it was failing. She bought it for a second, saying, “the box is breaking!”, but then she realized it was okay and said everything was fine and to not bring her up. Meanwhile, the crew rushed around to act as if they were desperately trying to rescue her. Still, she was insisting on staying buried during the planned climax of the show!

The host later copped to how fake it all seemed—”I know you had to put up with my awful acting, but it was part of the experiment. At no point were you in danger.”—and tried to salvage what he could. It was clear, however, that this was nowhere near as terrifying for the participants or the audience as all of the setup would suggest.

Yet that was also interesting, seeing how this just didn’t quite work. The moment with the snake was worth keeping the show on in the background for two hours, but how people reacted to this artificial context that’d been created just for them was also intriguing. Maybe they felt safe since they were on national television, live?

This is why I love reality TV: real people are unpredictable, and can derail the best-laid plans. Follow them wherever they go, and you might just stumble into something entertaining.