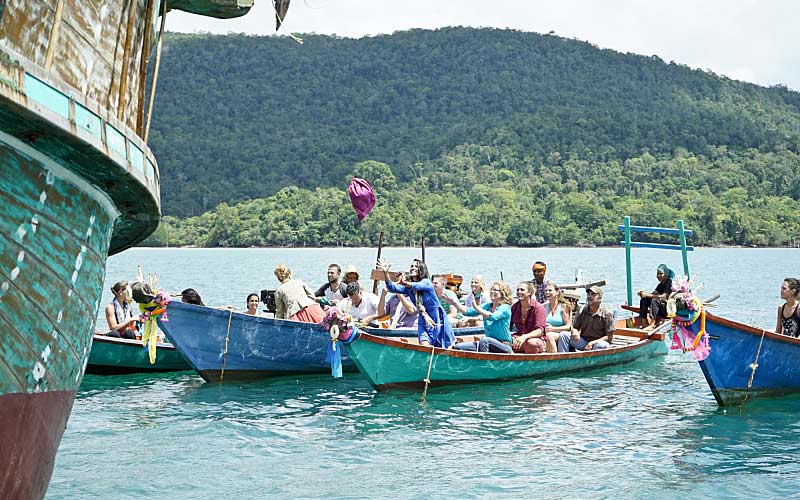 The Survivor Cambodia: Second Chance cast gets ready to see who's new school and who's old school. (Photo by Timothy Kuratek/CBS)

No show starts a new season better than Survivor, and everything there is to love about the CBS show, 15 years and 31 seasons later, was there during Survivor Cambodia: Second Chance‘s premiere. From a lack of self-awareness to insanely cute baby animal b-roll, it delivered.

With 90 minutes and only one true challenge (though, yes, the marooning functioned as a mini-challenge with the race to the rice) the show had a lot of breathing room, and used a considerable part of that on reminding us of the contestants’ histories, probably because a lot of them will make the same mistakes twice.

Those flashbacks and interviews were interspersed with extensive beauty shots of Cambodia, which is magnificent. While I appreciated seeing a new place and the attention given to the location—that’s been far too absent in recent years—there was a bit too of a heavy-handed attempt to reduce Cambodia and its rich history and culture to a mere metaphor for a game, with host Jeff Probst saying it is a reminder of “how the past can haunt and provides the inspiration to seize their second chance.”

After the scramble for supplies on a boat, filmed 15 years to the day of Survivor Borneo‘s debut and reminiscent of that first marooning, the episode spent a lot of time developing its characters and delivering so many moments to love.

Bayon coming from behind in the challenge. Jeff Varner lifting up his body mid-interview: “what just bit my ass?” Jeff Probst talking about Joe during a challenge and asking, “Is his pole strong enough to get it off?” (The answer from millions of lustful viewers: yes!) Joe making fire with friction. Joe leading everyone in yoga, wearing just his underwear. Joe being hot. Joe’s hotness causing spontaneous utterances from Andrew Savage’s daughters and making him uncomfortable, though not as uncomfortable as it’ll probably be for his daughters to sit on the couch with him and watch him spill their secret to Joe on national television.

Yes, there was a lot of Joe.

Of course, not everyone was salivated on by the editing and the other players. Stephen Fishbach got a hell of a brutal, comic edit, with the editors cutting back and forth between his bewildered, panicked face and the other men hacking down trees. Then they showed him struggling with the smallest of branches, and awkwardly searching for the idol until he realized, in an interview, that everyone knew “Fishbach’s looking for the idol.” Pause. “Dangit.” Flash forward to his inability to find someone to hug after the challenge and it wasn’t an ideal start for a former runner-up.

While Fishbach’s disconnection was played for comedy, there were other moments that had more immediate consequence. Abi’s efforts to barely conceal her temper and Vytas’s “smarmy” behavior, as Shirin accurately described it, made them episode-one targets.

Vytas was the first to be voted out, with a close vote that seemed to come down to Abi being annoying and Vytas being a threat and annoying. I’m glad to see a tribe not play the “we need strong men” card, though seeing the preview of Abi exploding made me realize I’ve had quite enough of that on Survivor so she can go soon, too.

The vote came down to “old school” and “new skool” except not really, and also who—on the cast, in production—decided to create this false dichotomy? Because it seems like they were primed to define themselves and each other this way, like this is a bad season of Lost.

The Jeff Probst Show also gets a second chance

On a season where everyone gets a second chance to redeem themselves, one unspoken but very prominent second chance also played out throughout the 90 minutes: The Jeff Probst Show. Yes, his talk show is back for another season, as I discussed when I joined the Survivor After Show to talk about the first episode.

Compare season one, episode one’s marooning, immunity challenge, and Tribal Council to season 31’s versions of the same things and you’ll see a dramatic difference. Yes, of course, the show and Probst were just starting to find their way back then, so it’s not quite an even comparison. In that first episode, he’s also explaining everything to an audience that knows nothing.

But just watch: the Jeff Probst we love is there, emerging: confident, explaining to the audience what’s happening, controlling the show. Season one Probst also knew when to get out of the way. It’s not about him; it’s about the players and the game.

Now, 15 years later, he’s in everyone’s face, shouting constantly, like he’s in the Big Brother diary room. Worse, he’s constantly forcing storylines into the game. “KELLY WIGLESWORTH YOU LOST THIS CHALLENGE TWICE NOW HOW DOES THAT MAKE YOU FEEL NEVER MIND I’LL ANSWER FOR YOU IT’S TERRIBLE AND YOU LET THEM DOWN AND YOU’RE ABOUT TO LOSE THIS GAME AGAIN 15 YEARS LATER YOU STUPID LOSER ARE THOSE TEARS OH THANK SWEET MARK BURNETT TEARS ON EPISODE ONE.”

His questions aren’t questions so much as they’re instructions for the players and audience. And we didn’t even see most of his heavy-handedness.

Probst actually got frustrated with Kelly Wiglesworth refusing to say exactly what he wanted her to say. “He came at her pretty hard” during Tribal Council, according to Dalton Ross, who defends his bro’s behavior by saying Kelly should have understood that playing into Probst’s narrative “is part of the inherent contract you sign when you agree to go on this show” and she should “at least give Probst something to work with.” I respect her a lot more for not playing Probst’s game, but I worry that it’ll affect her game maybe more than it already has.

Off camera, Probst also asked for the tribe to raise their hands if they felt vulnerable, everyone did, and he told them all that was “bullshit.” What do you expect—no, want—them to do? How about next time you just ask everyone to point at the person they’re going to vote for? Sheesh.

I need to stop resisting Probst Vista and accept it, because it is the new reality, but I cannot overstate how much it ruins some moments for me. I want Probst XP, the version who asked tough questions on behalf of the audience. I don’t want to watch a showrunner try so hard it wrecks the experience.

Of the season 31 twists and changes that we’ve seen so far, the hidden immunity idol clue played out the most successfully. First, Kelley thought she’d found the idol, celebrating until she realized that was premature. Instead, the idol was at the immunity challenge, and that gave us the best moment in a long time of someone finding an immunity idol.

What terrific work by both Kelley and the camera operators, who captured everything from the idol itself to the arc of Kelley’s actions. First, Kelley realized she’d missed it, saying “shit” and apparently thinking it was too late. There were no words, no cut in interviews to explain the obvious—other reality shows, take note!—but she clearly flirted with the idea of darting over to get it. And finally, right as the challenge was reaching its peak, she took the risk and grabbed it. Amazing. Also, that was smart placement of the idol by the producers, so it was accessible during the puzzle portion of the challenge.

The other major twist that affected the game—and, I think, the episode—was Probst’s announcement after the challenge that they’d go directly from the challenge to Tribal Council. Because they’re on lockdown and not allowed to speak while being transported to Tribal Council and waiting there (that makes sense if only because cameras need to be present to capture pivotal moments or decisions), they basically had no time to strategize, except in public at Tribal Council. Or, you know, with nonverbal communication that they have lots of time to practice at pre-Ponderosa.

As much as this may have led to an unpredictable result, I also think it hurt the narrative flow. The episode basically had peaks at its ends and a steady but flat line through the middle. There just wasn’t time to prime the Tribal Council strategy pump, increasing the tension and building up possibility for viewers.

Sure, we had earlier indications that Jeff Varner was conflicted about which way to go—with his old school allies or the hip new skool peeps who want to Netflix and chill instead of building a stupid shelter—so this vote wasn’t completely from nothing. But interestingly, in his Q&A with Probst, Dalton Ross reports that there actually was a lot of scrambling, including a pre-vote question from Jeff Varner to Kelley and Peih-Gee that apparently led to his vote-flip. But that was all cut out of the final edit, which is unfortunate.

Probst says all that was edited out for time, and I understand that, because it’s not like the editors could have easily eliminated any of his grandstanding or the lingering shots of Joe’s hot body while he was doing yoga. Survivor Cambodia: Second Chance has its priorities.