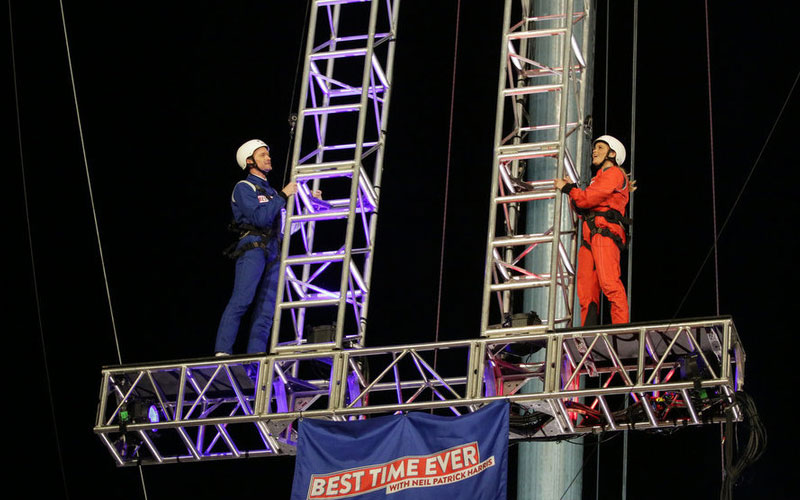 Neil Patrick Harris and Reese Witherspoon's stunt was one of the rare highlights of NBC's Tuesday night. (Photo by Greg Endries/NBC)

NBC’s three hours of reality television last night—two hours of live performances by America’s Got Talent‘s finalists, the one-hour premiere of Neil Patrick Harris’ Best Time Ever—offered a lot of surprise, but mostly that was disappointment. So much potential, so little delivery.

AGT’s finalists stumble in the finale

Nearly all of the all-male finalists on AGT turned in weak performances. With the relentless pressure to improve their act every week, most seem to have had nothing left, having peaked last week or even earlier.

Early favorite Piff the Magic Dragon did a baffling act that was short on his droll comedy and big on screw-ups, which I couldn’t tell were supposed to be part of the joke or not, such as when he and a stagehand swapped out a robotic dog for his real dog. And the magic was not good. Later, Paul Zerdin, the ventriloquist, did an impressive bit with several dummies at once, but it wasn’t as thoroughly entertaining as last week’s brilliant move of turning Howie Mandel into a dummy.

The best performances came from The CraigLewis Band—which did the best job of filling up the stage with energy and life—and the regurgitator. Yes, the regurgitator. I have found his act to be dull and usually don’t buy that he’s swallowing things, but this was impressive and he absolutely outperformed most of his competition.

My other least-favorite, Oz, would be more impressive if he called himself a magician instead of pretending he’s a mind reader. For the judges to act so astonished at what seems like an obvious trick (all of his “predictions” were written in different, sloppier handwriting than the rest of the words on the page) is continually frustrating.

I expect that Drew Lynch will win. The producers gave him the final slot of the night, even though Drew’s set wasn’t as strong as usual. (His best joke came during his banter with Nick Cannon.) Still, Howard Stern was as effusive about Drew as always, as was Howie Mandel, though Howie’s Donald Trump wall joke quickly deflated his credibility when it came to evaluating comedy.

For such a strong season overall to go out on such a low note is disappointing, but there’s reality television’s unpredictability in action.

Oh, NPH. He’s rapidly burning through his goodwill with things like his flat Oscars performance and much of Best Time Ever, especially the first half. Scripted and/or pre-taped bits may have been designed to keep the show moving, but they dragged it down. (The worst of those were given to celebrity announcer Reese Witherspoon, who was left with flat jokes that made her look stupid, such as confusing Antigua with antiquing. You have an Oscar-winning actor and you give her that shit to say?)

The good news is that was nowhere near as unwatchable as Knock Knock Live. There were promising segments in the second half, especially NPH and Reese Witherspoon racing up scaffolding that was raised high in the air by a crane. It was a stunt reminiscent of Fear Factor, with American Ninja Warrior‘s Matt Iseman doing commentary.

A game show segment showed that NPH is pretty good at hosting—better than at encouraging people, such as during the karaoke segment, when he mocked the people whose family members hid cameras in their living rooms and turned them into stars. Thankfully, that was overshadowed by Gloria Gaynor’s live performance overshadowed that.

Yet so much was just terrible. Promoting The Voice—by having NPH disguise himself as the pretend host of a European version of the show, interview the judges, and audition—would have been less painful if they’d just aired an ad for five minutes. Little NPH, a kid dressed up as NPH who engaged in scripted banter, was pointlessly indulgent, as was a segment that showed NPH had secretly photobombed a couple’s wedding pictures.

Best Time Ever is a name that invites instant judgement, but while the show may not have provided that on screen, it seemed that at least a very good time was had by those on Twitter hate-watching and mocking the show. Every series takes time to find its voice, especially a live talk/variety show, but this isn’t exactly a television climate that offers a lot of time to try things and fail. If Best Time Ever doesn’t lose whatever audience it did have, and doubles-down on reality instead of scripted bits, it might have a chance at a life longer than Knock Knock Live.