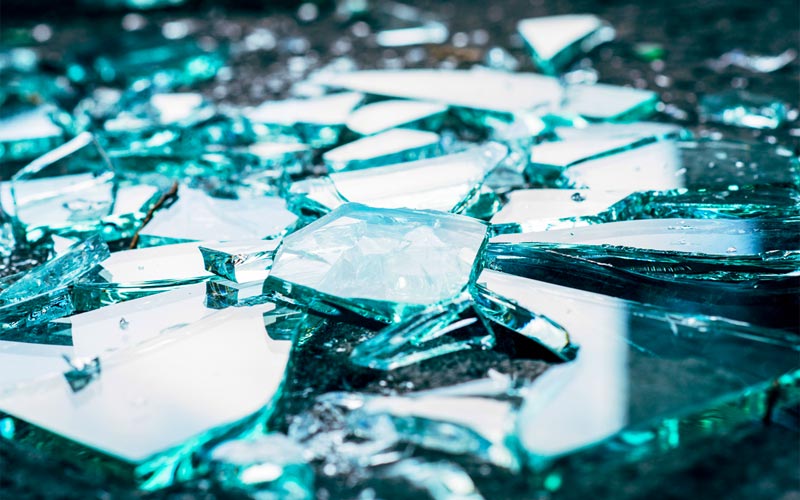 Broken glass explains a critical post-production job in reality TV: that of the story producer. (Photo by Shutterstock)

Reality TV story producers’ jobs can vary and involve all kinds of different tasks, but usually focuses on assembling a coherent narrative from the messiness of real life and a reality TV production.

Sometimes story producers do some actual, physical editing, and sometimes only editors handle that.

Regardless of the type of show or the specifics of the job, it’s challenging work that doesn’t really have a parallel in scripted television.

One reality television story producer has explained the job with a perfect metaphor and an example from a Bravo reality TV competition.

Jon Collins, who you may recall is responsible for this genius, was on the Jay and Tony Show Show podcast recently. During the episode, he said he worked on Project Runway last year, and discussed “one of the storylines” that involved someone who had “a big old freak-out”:

“Most of the freak-out happens off camera. And we come back to her and she’s like crying and all that stuff, and we have a bunch of [sound]bites from her, saying, like, ‘No one’s paying attention to me; everyone ignores me.’ We have no footage to back that up whatsoever. We have nothing.

So, I’m looking in the sewing room and there’s a bit where a bunch of the designers are chatting and having fun and all that, and late on, in the same sewing room, she’s sewing by herself at a different station.

I strung it out as if they’re laughing and having fun while she’s there, and she looks forlorn, and then I threw a bite in saying, ‘no one talks to me, and everyone ignores me, all this. So suddenly it sets up her freak out.”

“Strung it out” means assembling footage; “bite”s are soundbites, generally from sit-down interviews. Collins explains later that “we didn’t really have the footage in order to back up what she was saying.”

What a reality TV story producer does

He then offered what Jay Blumenfield describes later as “a great description of a good story producer”:

“What is your job? My job is: someone hands me a giant bag of broken glass, and I make a mosaic.”

That’s it exactly: taking so many pieces and turning it into something recognizable and narrative.

Of course, that broken glass is made up of real people’s words and actions, and is formed into a mosaic that, ideally, is indistinguishable from real life. Tony Marsh adds that critical point:

“In this story lives a little bit of what goes right and wrong in unscripted TV, which is, you’ve sort of made something that didn’t exist, but it sort of did. You gave a visual representation of what goes on in this woman’s life so that you could get a sense of why she freaks out, which you did have. And done wrong, you’ve put words into people’s mouths that they didn’t say, you’ve made people experience things that they didn’t experience, and that’s where I think we cross the line. And that sounds like you were right on that line.”

Recommended: How I went from reality TV fan to reality TV story editor

Listen to the full episode here for more on the mosaic and Collins’ blog with satirical network notes.