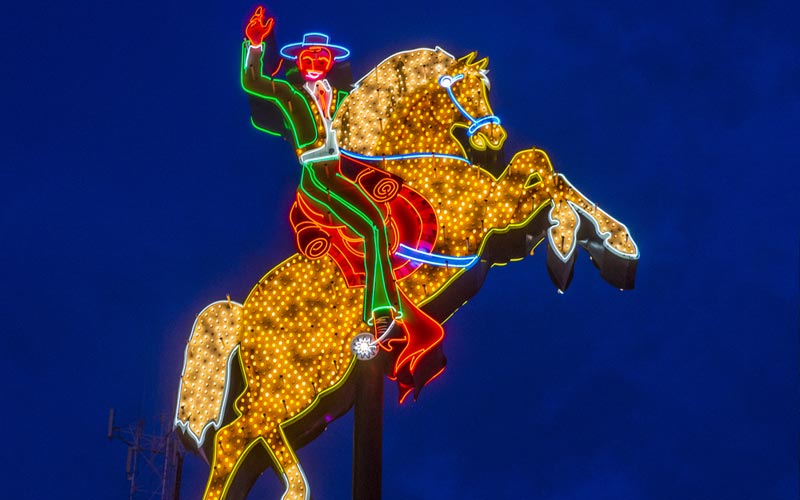 The Hacienda horse and rider sign is at the The Fremont Street Experience in downtown Las Vegas, close to where The Real World 31 will reportedly film. (Photo by Kobby Dagan/Shutterstock

MTV has not publicly renewed its ratings-challenged and creatively declining flagship reality show The Real World, but reports indicate that it is getting ready to film its 31st season in Las Vegas at the Gold Spike Hotel and Casino.

Vital Vegas reported the location after DTLV teased that the show would be filmed downtown starting in October. If these reports hold up, this will be the third season in Las Vegas and the first time the series has returned to the same city three times.

Gold Spike, which is located a block north and east of downtown’s Fremont Street Experience, has a recently renovated 44-room non-gaming boutique hotel that opened last fall, and also “rents out another 42 rooms in its main tower to monthly residents,” according to the Las Vegas Review Journal. Either could house the cast.

Earlier this year, when I asked the network if the show would be renewed, I got a non-committal, non-enthusiastic answer. This summer, however, the show started casting again, as the Real World-tracking people at Vevmo noticed. Open casting calls continued into August.

That’s a pretty clear sign the show is definitely returning. Alas, while I don’t want such a groundbreaking and once-incredible, genre-defining show to exit television on a low note, I also don’t have confidence that it can recover.

Considering that its slide began with the first Las Vegas season, this would be an ironic/appropriate final season, but season 30 also seemed like a nice round number to end on, and it seems like the show just won’t go away at this point.

While The Real World long ago gave up having any real connection to its location, the last two seasons have tried to create conflict and drama by having producers inject people from the cast’s past into the house. Earlier this year, co-creator Jon Murray told me that was ethical because “people coming on The Real World know now that it’s more than just seven people living together.”

While he stepped down as chair of the company he founded, Bunim-Murray Productions, in April, Deadline reported that he’d remain “on board as executive consultant, focusing on development and overseeing some of BMP’s long-running series that include Real World.” So we can probably expect it to continue in that direction, as a show that’s about “more than just seven people living together.”

I miss the days when that used to be enough.