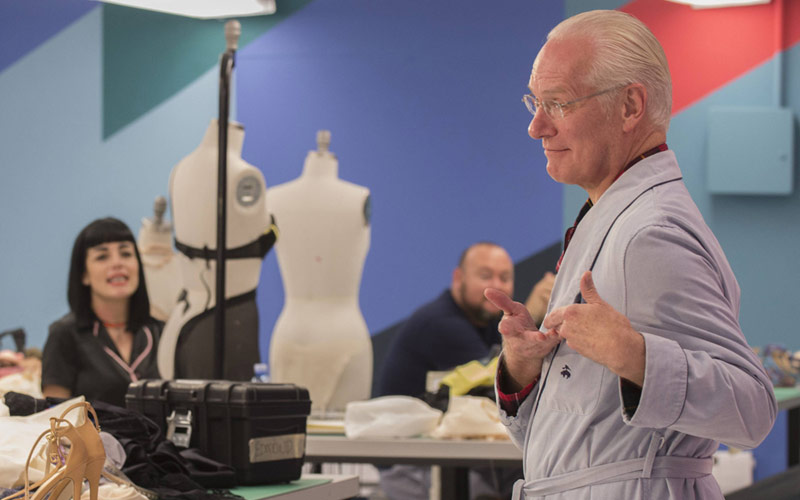 Tim Gunn in his pajamas on Project Runway's "Lace to the Finish" episode. (Photo by Barbara Nitke/Lifetime)

Project Runway Junior is well underway—no, wait, that debuts in November This is season 14, but it just feels like junior, and I’m not talking about the sleepover the producers threw in to tire out the cast even more. No, it’s the immaturity of some of the contestants, both in personality and their performance in the challenge, that stands out. Thankfully, due to a lack of understanding of the female anatomy and a perpetually dismissive attitude, the most immature designer was sent home last night.

But it was not before both he and the rest of the cast, including Heidi Klum and Tim Gunn, gave Project Runway its most quotable episode ever.

I can’t possibly quote it all, but these are my favorite lines from “Lace to the Finish”—though there were also so many great visual moments, too. Swapnil pretending to strangle himself with one of his pieces of strap fabric when Heidi Klum announced that they all needed to go to the runway in 10 minutes for a twist. Tim Gunn in his red flannel pajamas. Tim Gunn in other pajamas carrying a lantern.

Thank you, Project Runway, for that hour of television magic.

Blake’s Book of Ignorance, chapter one
Tim Gunn pointed out that Blake appeared “stymied” by the challenge of making a bra and panties for Heidi Klum’s intimates line, and Blake’s reason almost knocked Tim Gunn over physically: “Yeah, I don’t usually wear underwear.”

Blake’s Book of Ignorance, chapter two
Jake asked, “Blake, you do realize where women’s genitalia falls, right?” Of course, Blake did not, so Ashley gave him a tutorial. It didn’t help, because why learn when you already don’t know anything?

Blake’s Book of Ignorance, chapter three, with bonus wit
Blake announced, “I need to be sleeping above everybody else. So I have Laurie help me. I mean, the air mattress is pretty heavy.” Just when I was about to hurl something at the television, he at least made a joke out of it: “It’s not, like, like low-fat air it’s like regular air, so I feel like it makes it heavier.”

Blake’s Book of Ignorance, chapter four
On the runway, Blake tried to excuse his shoddy work by saying, “This is my first time, or even seeing…” and Heidi cut him off: “That is a little bit of baloney.” She asked him, “Are you trying to be a fashion designer, or no?”

Blake’s Book of Ignorance, chapter the end
After he was eliminated, he said, “I just felt like they were cutting me short.” Yes, that’s what happens when you get eliminated.

The most judgmental producer “um” ever…
…was uttered right after Jake said of lingerie: “The closest I’ve come is to either taking them off someone else or putting them on myself.”

Who’s really in charge
In an interview, Candice said “garter strap on” and then quickly addressed the producers: “that sounds terrible–a garter strap on. Don’t use that!” So they did.

Heidi Klum burn book, part one
While walking around the workroom with Tim Gunn, Heidi Klum greeted Edmund by saying, “Edmund—or should I call you Captain Tacky for today?”

Heidi Klum burn book, part two, with gasoline from Tim Gunn
She didn’t let up. “I mean, you have taken off a few bras in your life,” Heidi told Edmund, “and they look similar to this? You’re hanging out with the wrong girls.”

Tim Gunn immediately said: “Or you were paying for them.”

Size doesn’t matter
Joseph said, “I wanted to make sure I made my panty small” and insisted, “That’ll cover vagina.” Candice suggested otherwise: “I don’t think that would cover mine.”

Location does matter
As Blake did a fitting on his model, Candice observed, “Blake still doesn’t know where the vagina begins and stops.”

Thanks for sharing that on national television
Jake redesigned his thong because his model was “not feeling confident” because, as he told his fellow designers and the cameras, “she’s not having her best day; got dumped this week.” And having that play out on TV a few months later will be even more helpful than concealing underwear.

Grandpa Gunn is tired
Tim Gunn showed up to the pajama-clad sleepover and, before saying he wouldn’t stay because “Grandpa’s too old for it,” he told the designers, “Get to the point where it is going well. I just wanted to give you a pep talk.” And that was the entire, clearly fatigue-affected pep talk.

The most indirect description of muffin top ever
Nina Garcia, as the camera zoomed in on straps pinching a model’s waist and squeezing her skin: “the two straps on the side are strategically in an area that is complicated for some women.”

The most direct criticism of the episode
Nina said of Blake’s saggy bra: “There is no fit, there is no quality, and there is no sophistication, and I think those are integral, especially when you are looking to buy lingerie.”

Wake-up call
When pajama-clad Tim Gunn woke up the designers, who were sleeping on the actual runway, Lindsey told us, “When I hear Tim’s voice, my first thought was, ‘I think I left my television on.’ Then I was like, ‘Oh, I’m on television.'”