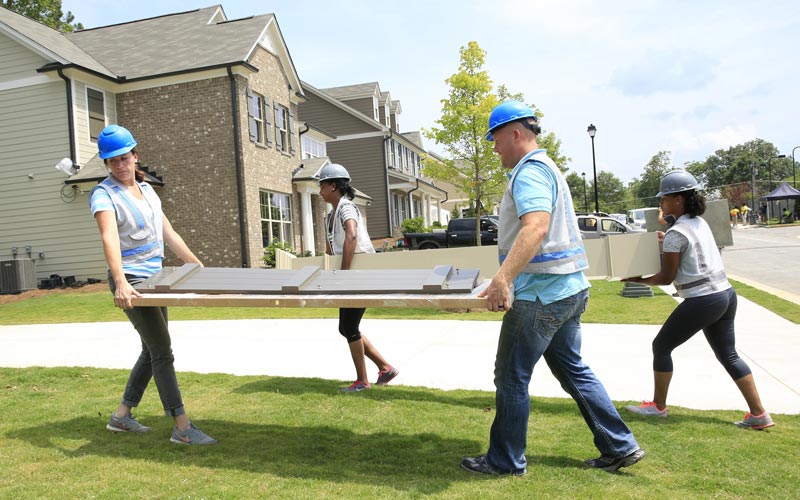 Kasey, Oreonna, Ben, and Tiffany (left to right) on the finale of Fox's Home Free. (Photo by Fox)

There has been no reality competition I can recall that has more effectively created feel-good, tear-jerking moment in every episode. Host Mike Holmes introducing the losing couple to the “deserving family”—themselves!—consistently delivered, and was a well-executed twist. The families felt bad for a few moments, but almost immediately, at least in TV editing time, had their tears turned from sad to happy. It’s not unlike wrapping a gift in a fake box: The recipient may momentarily be disappointed, but quickly they discover that you actually gave them something wonderful.

(As much as I loved those moments, and as well as this worked, it seems like a one-season show to me. How do you pull it off again without piling on the contrivances? Worse, I fear that other shows will try to copy it and do well-intentioned but ham-fisted things instead.)

Of all this season’s reveals, from the most joyous to the one where the guy had to be talked down by Mike Holmes so he wouldn’t look like a complete jerk a few minutes later, the finale was the most anticlimactic. The couple who won, Oreonna and Tiffany, actually came in second, so the real winners, Ben and Kasey, thought they lost. The fake winners were overjoyed, yes, but their reveal didn’t have the reversal of the other reveals.

Later, the big reveal was dampened slightly when Mike Holmes first showed Ben and Kasey all the other “deserving families,” i.e. their fellow competitors, and revealed that each of them had won a home, too. So, Ben and Kasey had a long time to catch on compared to the other couples, who were usually caught in disbelief when Mike introduced the deserving family by showing them a picture of themselves.

But who am I kidding: the finale was still a cry-fest. And then seeing the couples and their kids reunite in their new homes was just wonderful. Let’s all cry together again:

Questions about the production

Oreonna and Tiffany’s second-place prize was the final build house, which was worth around $337,000, while Kasey and Ben were given a sponsored home with a value in the mid-$400,000s.

Honestly, I think Oreonna and Tiffany got the better deal, even if their house is worth less. Ben and Kasey’s house’s interior was one of the least impressive on the entire series, and felt more like a generic, dated showroom house, complete with fake plants. Oreonna and Tiffany, meanwhile, get a house that they helped build and that has super-personal touches from a couple they grew very close to.

I am curious if these couples will sell their new houses or move to Georgia, and if they do stay, will they be able to afford things like the property taxes, utilities, and/or homeowners association fees? (Extreme Makeover: Home Edition had a clever way of getting around taxes but some families were still affected financially by their suddenly massive new house.)

Home Free left me with other questions, too: How did some of the couples’ family members manage to show up so rapidly after the reveal? How far in advance did Mike Holmes decide who would be that week’s loser/winner? A disclaimer at the end of the episode insisted that “The Judge’s decision is final” but noted that “The Judge may discuss his decision with Producer or Network in advance for production purposes.” How far in advance? The day before? During the previous build? The connection between the losing couple and the house they won often seemed too coincidental. Maybe that was just the editing telegraphing the winner?

Yes, Home Free was an entertaining hour, especially with its joyous weekly conclusion, but it was an imperfect show. The challenges were often a highlight, especially the finale’s bowling ball obstacle course, but they really were usually peripheral and tangential to the whole process of renovating the house. One task involved cleaning out trash from a house that seemed to have been placed there, so the challenge literally made the renovation more difficult.

It was clear that Mike Holmes/the production’s team did the bulk of the design and renovation work—and of course, the teams were untrained laborers, so the expectation couldn’t have been too high. While the teams absolutely did learn and do projects, and ultimately made some significant contributions, the show’s focus on their work was scattershot. There wasn’t really a clear storyline to follow.

Mormons and lesbians, together at last

Ultimately, everything seemed like an excuse to give houses to 10 couples. This is not a complaint, but it does explain why the show felt held together by the glue of that emotional moment, the connections between the teams, and not much else.

An unexpected bonus of the finale and the season was seeing how close the final two couples became. That was possibly the greatest source of emotion in the finale. Ben and Kasey were devastated that they lost, but were clearly, genuinely happy for their friends Oreonna and Tiffany.

At the end of Home Free, it was “the Mormons and the lesbians, together at last,” as either Oreonna or Tiffany said. “Breaking down boundaries.” They’d all taught each other.

While Ben and Kasey came too close to comfort to that absurd love-the-sinner idea—Ben said in an interview, “just because our faith is saying one thing doesn’t mean we can’t still love people,” and Kasey said, “We can live our life and you can live yours, and we will love you as people”—that didn’t really seem to be an issue here. And Kasey completed her sentence by being overcome with emotion. “We do love Tiffany and Oreonna and”—she started to cry—”they’re great and I’m so glad that we met them.”

What’s clear is that, even after being on a reality competition for a short period of time, they shared a bond that overrode all else. Later, right before Oreonna and Tiffany won/lost, Ben said that if his friends won, “I’d be ecstatic for them. In today’s society, you wouldn’t think we’d be close with the way our backgrounds are, but they’re great people.”

Ben’s statement is at once the problem and the answer. Our toxic 24-7 news cycle, bullshit-spewing culture has told us that we can’t get along with people who are different, but really, we’re all just people who want the same things. Our society is us, those relationships and connections, not the artificial divisions created by people who have to sell fear to increase their own power or wealth.

On Home Free, all the contestants got houses, but in that connection and understanding, they got something even better, and so did we.