Face Off has been introducing new challenges this season, its ninth, and they’ve improved the Syfy reality competition significantly.

Professional talent competitions like this live and die by their challenges, and the challenges have had more of a spark all season: engaged couples transformed into zombies who were then married by host McKenzie Westmore; two models merged into one creature; Rorschach ink blobs as inspiration for characters.

There’s a lot of variety that has nudged the show out of the rut it’s been in recently; the episodes don’t feel as interchangeable with other seasons, and the variation has resulted in some contestants excelling one week and failing the next.

As a bonus, the new challenges force some variation in the absolutely tiresome script: McKenzie’s Westmore identical, robotic lines; the contestants’ phony wondering what’s coming in a challenge that happened long before they were interviewed; the frustrating cut to commercial when Glenn Hetrick says “and the winner is…”.

Earlier this season, the focus challenge was introduced, asking the contestants to focus primarily on a certain part of their characters. In that case, it was their models’ faces. The two focus challenges so far haven’t quite produced revolutionary results, as the contestants have still given attention to costumes and other parts, but narrowing the scope has a way of pushing them harder.

Tuesday’s episode introduced the gauntlet, three challenges in one episode, and absolutely no sculpting or molding. The result was a fast-paced episode that tested their skills well and avoided the feeling of repetition that Face Off suffers from occasionally.

It was not unlike The Great British Bake-Off, actually, with three challenges leading to one elimination. This was so successful—especially the way it changed the too-often monotonous workroom footage. There’s just so many times we can watch someone struggle to open their mold, and the show long ago passed the point at which cliffhanging on a stuck mold was anything more than annoying. 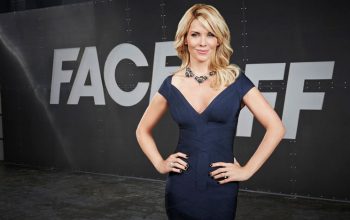 The only misfire was the ranking process. Doing that made sense and really offered some additional stakes in each stage, but how exactly each level was weighted was never explained, except in a suspicious voice-over from host McKenzie Westmore that said stage two carried more weight. Improbably, Kevon went from last place to first after winning stage two, and that would suggest significantly more weight was given to that second stage.

Again, objective scoring is terrific for talent competitions—I loved when Top Chef Masters‘ judges awarded stars to its chefs—but be transparent. Just show the scores. Otherwise, it seems like something is being purposefully concealed from the contestants and/or viewers.

In fact, an entire season of numerical scoring and frequent gauntlet challenges that test micro skills would be a welcome addition. At the very least, Face Off should keep changing things up, to keep both its contestants and its fans engaged.