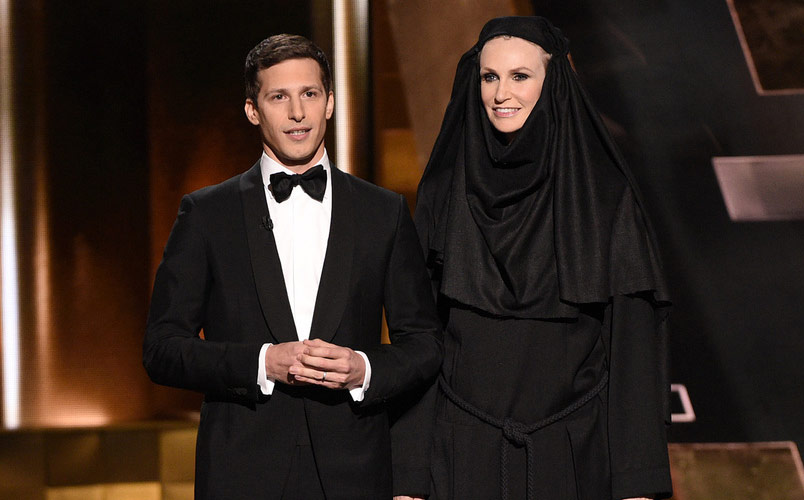 The day before its ninth season premiere, The Voice won its second Emmy, meaning The Amazing Race did not win its 11th Emmy. The outstanding reality competition Emmy was the only unscripted category presented at the prime-time Emmy telecast, because Hollywood fails to see a significant portion of television as deserving of its time (and, yes, reality really screwed up an opportunity—never mind how so much of reality television doesn’t think of itself as deserving).

As much as I did not want The Amazing Race to get another default award because it has ceased to be truly amazing, Mark Burnett actually made me feel bad for the CBS show by starting his acceptance with this: “Sorry The Amazing Race; it’s our year this year.”

Way to express gratitude! Yes, he also thanked the “millions of fans that made this America’s favorite music show” and a laundry list of executives, but his opening came across as rather dickish, and I say this as a person whose has reacted to a TAR win like this.

Among the nominees—The Amazing Race, Dancing With The Stars, Project Runway, So You Think You Can Dance, Top Chef, and The Voice—I actually think The Voice is the least-interesting one of all. It is a competently produced show, but Project Runway and Top Chef both had strong seasons last year. So You Think You Can Dance has been sliding for years but certainly did, at one time, deserve recognition for doing things no talent show was doing, primarily focusing on talent over all else.

What’s most disappointing, as I’ve written again and again, is that there were so many options and the Television Academy just chose the same shows it always chooses. Those who won all the other reality awards, including Jane Lynch for host, were mostly repeats.

The reality competition award was given by Keegan-Michael Key and Jordan Peele, aka Key and Peele, who made a joke about reality TV tropes by saying they actually came from the Republican debate. It was not their best material.

Far better was host Andy Samberg’s opening number, which gave more time and attention to reality TV, as it included a joke about the number of shows with the word “wives” in their titles and a few other references: