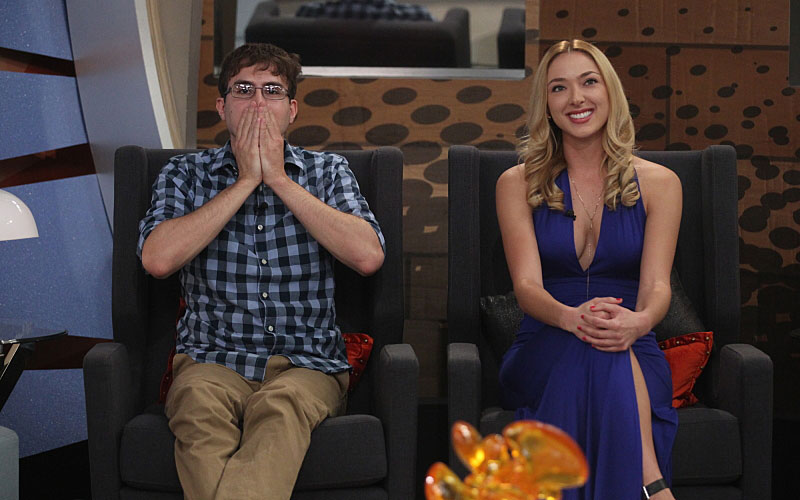 Steve Moses defeated Liz Nolan to win Big Brother 17, winning the jury's vote just like every other man who faced off against a woman. (Photo by Sonja Flemming/CBS)

Though the motto of Big Brother is to “expect the unexpected,” throughout its 17 seasons on the air, one thing remains resoundingly constant. That is, when a man and a woman are the remaining final two houseguests and have to face off in front of the jury, the man always wins the money.

Like its more respected CBS sibling, Survivor, the ultimate victor of Big Brother is determined on its final episode by a jury of previous-expelled game players who vote for whoever will take home the big prize.  (It’s $1 million on Survivor; $500,000 on Big Brother.)

So far during the show’s ongoing lifespan, not only have men won the grand prize 12 out of 17 times, but all five times that they have faced off opposite a women in the final two, the man has been voted the win. The only time a woman has won the show/game—which has happened just five times—has been those times when she has gone head-to-head with another woman at the end.

In terms of genders and final two pairings, this is how Survivor’s victors break down: On Survivor there have been 20 times that a man has faced off with a woman or women at the final Tribal Council. Of those 20 times, a man has won 13 times while women won seven times. The final Tribal Council has pitted two female players against each other six times, and four times it’s been all-male.

Why do Big Brother and Survivor juries prefer men?

Of course, on both Survivor and BB, there are no rules for how the final jury members cast their ballots.  They can vote on who they like the best, who they think played the best game or, heck, they can even flip a coin if they want.

But these numbers, historically so favoring men as winners (especially in terms of Big Brother), seem to suggest a major gender bias and a profound double-standard is very much alive and well on reality TV.

For both programs, it’s very difficult to get to the end of either show/game without displaying some physical prowess, some interpersonal skill, some chess-like strategy and, eventually, usually, some scheming, a little lying and a touch of backstabbing.

The preponderance of male winners over female winners, especially in final two situations, however, indicates that certain behaviors that are forgivable—perhaps allowable or even expected—in men are completely verboten in women; that men who trick and manipulate are viewed (by both men and women) as “good game players” while the women who do the same are viewed as betrayers, cheats or worse.

Of course, there are many variables that contribute to these final voting outcomes. Just how despicable one player might be (infamous player Russell Hantz who twice made it to the finals of Survivor and was both times defeated comes to mind) as well as the gender make up of the jury would be two important factors to consider.

Furthermore, just because a woman makes it to the final two does not mean she necessary deserves to win any more than the man who has joined her there in the almost-winner’s circle.  The same thought process that goes into determining a winner in a male-male or female-female match up is often the same thinking that goes into choosing the winner in a male vs. female final two.  For example, Big Brother jurists have shown a tendency to often vote with their head rather than their heart—giving the win to the person who made the biggest game moves, who took the most risks during the course of the game, rather than, perhaps, the one they personally like the most.

For better or worse, reality television (and television in general) is often viewed as a microcosm of the larger society.  And the leg-up, the gender advantage, that men (by being men) seem to have in many of these on-air contests only points further to the fact that there are still two distinct modes of behavior, two very separate tracts of what is viewed as “acceptable” for the two genders.  There’s one for men and there’s one for women.

Equally unfortunate is the fact that women still seem to buy into and support some (many? most?) of these double standards.  They certainly seem to when they serve as reality TV contestants/final jurists.  After all, in regard to the endless number of male winners on Big Brother, those numbers don’t lie.

Cary O'Dell works for the Film, Broadcast and Recorded Sound division of the Library of Congress. He is the author of three books, most recently June Cleaver Was a Feminist! Reconsidering the Female Characters of Early Television. His work has appeared on TVParty.com, PopMatters.com, RogerEbert.com and Sometimes-Interesting.com, and other sites.