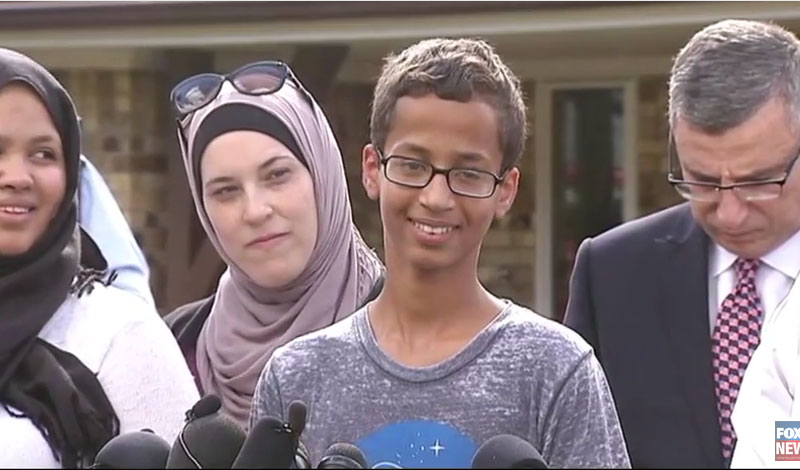 14-year-old Ahmed Mohamed during a press conference, as seen on Dallas' Fox 4 News.

Ahmed Mohamed, the 14-year-old who was arrested and suspended from school because his homemade clock was viewed as a threat, will visit The White House at the invitation of President Obama in October, and he also wants to go on Shark Tank.

A clock he built to show his engineering teacher freaked out another teacher, who “thought it was a threat to her,” Ahmed said during a press conference. He was arrested, handcuffed, and taken to a juvenile detention where he was fingerprinted, photographed, and interrogated, as The New York Times reports. Charges were later dropped, but he was still suspended from school for three days even though the clock turned out to be a clock. (The Dallas County Democratic Party chair said in a statement that “Ahmed’s arrest is a logical conclusion to Islamophobia in Irving and it’s deplorable.” The NYT points out that “on some conservative sites, he was the subject of slurs and vitriol and suggestions that he and his family did not belong here.”)

At a press conference (watch below), he thanked his social media supporters, and was asked by a reporter if he’d like to go on Shark Tank. “I would love be on Shark Tank,” he said. When pressed for more specifics by another reporter, he made it clear that he knows the show and/or what to do as an inventor, referencing an invention that involves neodymium magnets. “First I’ll patent my invention, then I’ll do all the necessary steps to get there and then go from there.”