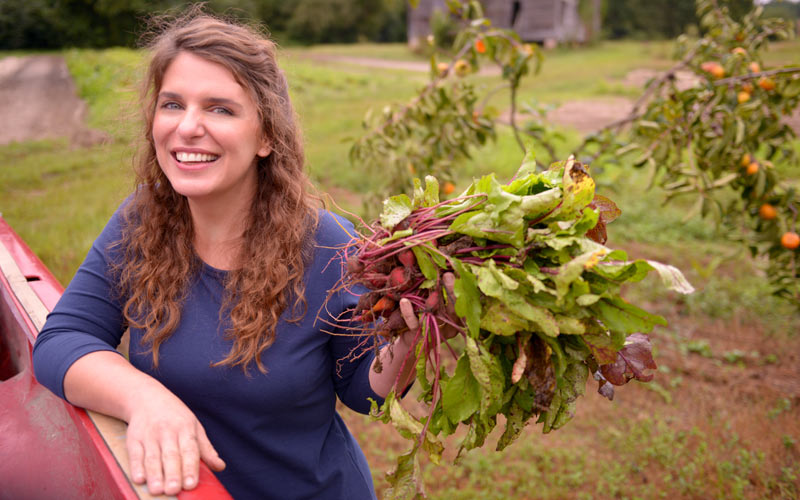 The charming series A Chef’s Life is back for a third season on PBS, chronicling chef Vivian Howard’s exploration of ingredients in the South. But as much as it is about those ingredients, the Peabody Award- and Daytime Emmy-winning reality series is also about her life—and about changing the way food television treats chefs.

While the episodes remain structured around an ingredient, the show comes alive when it focuses on Vivian’s life and, of course, her personality. But early on, the show struggled to find a balance.

“In season one, we had no idea what we were doing,” Vivian told me last month in Los Angeles, when we talked after her Television Critics Association press tour appearance. “We set out to make short film about the dying food traditions of eastern North Carolina, and the farmers who grow the ingredients that people are cooking with. After we shot the pilot, then the restaurant caught on fire, and I said that I didn’t want to it any more—do the show any more. And Cynthia said, ‘Well, let’s just film a little bit of it.'”

Vivian is referring to series director Cynthia Hill, who, prior to the fire that concluded episode one, also pushed Vivian to do some“off the cuff” filming in the restaurant.

Those instincts gave the series its heart, I think. Vivian said that, even by the middle of the first season, when the structure started to congeal, “I was still kind of awkward in front of the camera and didn’t always say what I thought.”

But she definitely opens her life and work to cameras in ways others might not be.

Talking about the Southern Foodways Alliance dinner episodes, Vivian admitted that the ingredient faded away, but “was such a big deal for me professionally, we felt like we had to make it a part of the show. It’s not something you ever see—most chefs would not allow a camera crew to come and be in their way for their biggest career-defining moment they have. Sometimes we just feel like the context is so important that the ingredient takes a back seat, like the James Beard dinner in New York. Egg was not the star.”

Season three starts tonight, or whenever your PBS station wants to air it (oh, PBS), but season four is already being filmed—and there is a plan for season five.

“Season four will be the end of those ingredients” they set out to showcase, Vivian told me. That’s just the end of “the show as it exists right now. I will go on a book tour in October of 2016, and so our hope is to take the show on the road for the book tour.”

That’s a year away, though. A Chef’s Life films about three or four days per episode, with only one episode being shot a month, meaning an entire season takes a year. “We want to showcase an entire year, produce-wise,” Vivian said.

watch seasons 1 and 2 of A Chef’s Life free on PBS.org

Major changes to seasons three and four include the way 1) they “plan a little more in advance” and thus can find “story arcs through the entire season and not just through one episode,” and 2) the fact that her kids won’t be on TV much, if at all, any more.

“I don’t want to have a bunch of Kardashians running around my house,” Vivian said, illustrating how her daughter mugs for the camera whenever she sees it.

Speaking of celebrity, while Vivian Howard is not Kris Jenner, the series and her talents have brought her a lot of attention.

“Most people who are on television don’t have to be out in public, or people don’t know where to find them. But people have started coming to eastern North Carolina to the restaurant to find me. And that’s where I work. On any given night, the restaurant’s full of people who are squealing and super-excited. I feel—because they’ve come so far, and because I want to make people happy—I feel like I need to go out and speak to everybody,” she said.

That’s what leads to the “awkward celebrity” she refers to in the trailer above. “I have said some of the strangest things to people, because it makes me very uncomfortable,” she said. “I’m just awkward in that space.”

We talked briefly about the shift of food programming to competitions and other kinds of non-cooking shows, which has definitely plagued the channel best known for food television, and she told me a story.

“I had a meeting with the Food Network several months ago. I have a really hard time not being honest, and I really offended them. And they basically—I’m like an urban legend there now. I didn’t mean to; I was just trying to help them,” Vivian said. “It didn’t use to be that way. And I know they don’t want to do that; they’re just chasing ratings, and I get it. You’ve got to have ratings to be able to do anything. But I thought I was helping them and they did not think so.”

But not any more? “No. I used to love Top Chef—like, the first three seasons of Top Chef, I thought it was great. And I wanted to be able to be that person who was confident enough to go on Top Chef. But I chose to just watch it. I like Mind of a Chef, I think they do a good job, and I like—I have a problem with food TV.”

She paused. “Because, I think—and I think Mind of a Chef does this—they exalt the role of chef to something that it’s not. They make these people seem like gods, and they make the industry seem glamorous,” she said.

“That was one of the things I wanted to show in our show,” Vivian added. “I’m just a person, and this is what I look like on a daily basis, and it ain’t always pretty. This is stressful. That’s my beef with food TV and what we’re really trying to do to counteract it.”