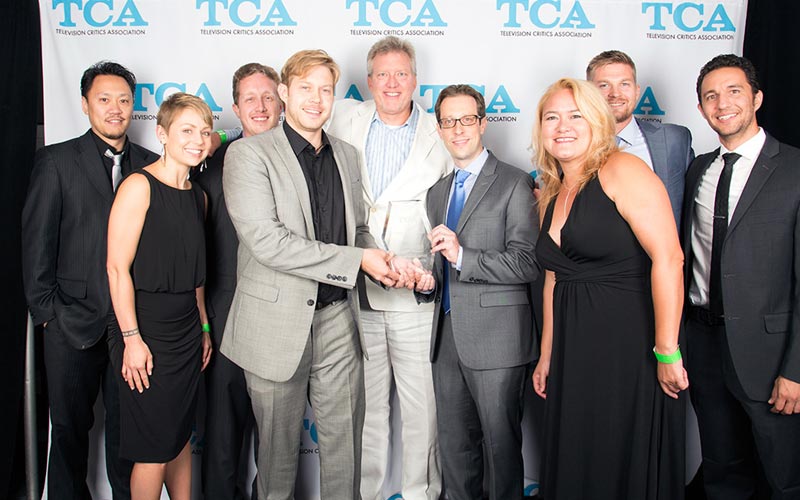 Producers of Starz's The Chair backstage after accepting their TCA Award for outstanding reality programming.

The Television Critics Association has given two TCA awards to unscripted series, The Chair and The Jinx. Also in nonfiction, the award for outstanding achievement in news and information went to HBO’s Last Week Tonight with John Oliver.

The Chair, Starz’s exceptionally crafted documentary series that followed two filmmakers as they produced films from the same script, won for outstanding achievement in reality programming. While the show ultimately offered a $250,000 prize and was categorized as a competition for the Emmys, it’s the first non-formatted, narrative, documentary-style series to win a TCA award in the reality TV category’s five-year history. (See previous winners.)

The Jinx, the outstanding and shocking HBO documentary series that captured Robert Durst saying he “killed them all,” won the TCA award for outstanding achievement in movies, miniseries and specials. The series concluded with troubling questions about its timeline, and its director still has not addressed those.

Host James Corden, of the Late Late Show, joked during his monologue that “we’re at an awards show where we nominated an actual murderer.”

Andrew Jarekci accepted for The Jinx, and “at the core of this story, there really are a lot of lives that are ruined” by the story documented in the series. He cited Kathy’s family, who he said was “terribly mistreated by the Durst family who did everything in their power to push this crime under the rug,” and added, “given the power of that family and wealth of that family, they could have handled this in a radically different way, and it might of led to some kind of accountability before two other people were murdered as a result of their not doing anything about the fact that, in my view, Bob Durst had killed his wife.”

Chris Moore accepted for The Chair, and said, “The TCA is really acknowledging a show that, again, very few people saw. And so, for me, I think that’s a role that the critics should play. I think they should be standing up and saying, ‘This is a show you might have missed.’ … It’s important: There’s so much stuff. … For all of us that work on the show, we’re so grateful for the TCA to give us this award, to give us a little chance for other people to check it out, and to learn about it, because it’s hard to get discovered out there. And it means a lot to us that the people who watched it actually looked at it and said, ‘You know what? That’s a pretty cool show.'”

These were the 31st annual TCA Awards, and the fifth year of presenting an award for reality programming. Here’s the full list of winners: