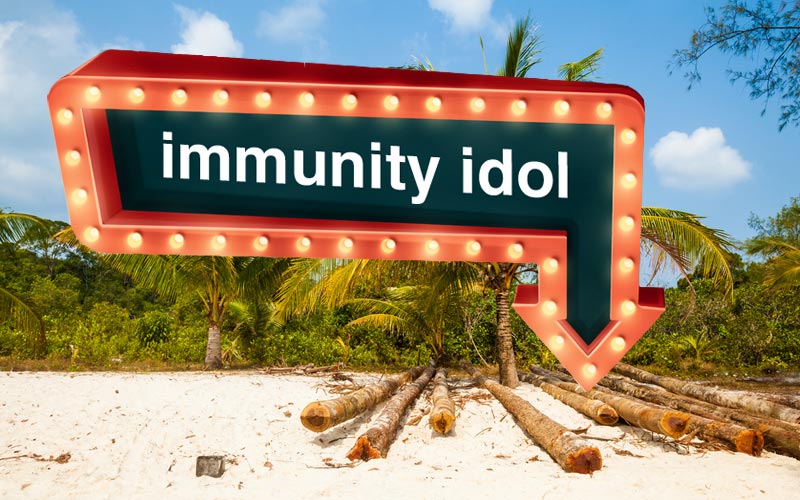 Hidden immunity idols will be placed in public for Survivor Second Chance. (Photos by Shutterstock; composite illustration by Andy Dehnart)

Survivor Second Chance will introduce two major changes to hidden immunity idols: they will no longer be hidden, and they will all look different. Instead, the idols will be in public locations at challenges, though clues will still be hidden at camp to point out the idols’ locations.

Jeff Probst revealed this twist on location in May, and EW published it today. Probst explained that “the idols are going to be so fun” because:

“We’re making idols look different, so every idol will be unique, and one idol will look really fancy and the next idol will look like a 5-year-old made it. … You’re going to have to convince somebody it’s real because they’re going to think it isn’t. But that also opens a door to make a fake idol and convince somebody it’s fake, and they won’t know which is up and which is down. You can play all angles on this.”

As to the idols at challenges, Probst credits Dalton Ross of Entertainment Weekly with this idea (“something that you … have been pitching for years—along with us”) and says that once someone finds a clue:

“You will know exactly where it is. There is no search. The only question is, can you do it in front of your tribe in the middle of a challenge and get away with it? I love that.”

Considering that hidden immunity idols have been easily found without clues for several years now, this is a welcome change. The Survivor purist in me might have voted for a season of no idols, since there have been several changes to idols over the last five years (for just a few examples: 1, 2, 3, 4) I am glad they’re trying something new.

And this is intriguing! I’m curious how the idols’ new location will affect people’s willingness to go for them, especially in early episodes. Will the idols be left alone? Or will it be an advantage to have everyone in the game see and know a player has an idol? Pre-merge, will people try to grab an idol at the expense of their team’s performance? Also, once the first person goes for an idol, I wonder if clues will even be necessary, or if people will start tearing off pieces of challenges.

Or will they be placed in a way that makes it easy to grab them without anyone noticing—though that somewhat defeats the advantages of placing them at a challenge?

Other questions: Since the idols will be in public, and presumably there’s a point at which people will know this, I also wonder how the different designs will affect everything. Can you really pretend you got an idol at a challenge if no one saw it there or saw you grab it?

It’s all very interesting and full of potential.

That said, I will take issue with one thing Jeff Probst said (of course I will!). Introducing these twists, he told EW:

“We want this whole season to be a season in which they can play; we want to give them the room to play Survivor.”

That’s an admirable goal. But why not do that with less rather than more? Why not just let them play the game as it used to be? Perhaps that torch has been snuffed and I’m just being a Survivor conservative, but I’d love to see the game elements stripped down rather than piled on.