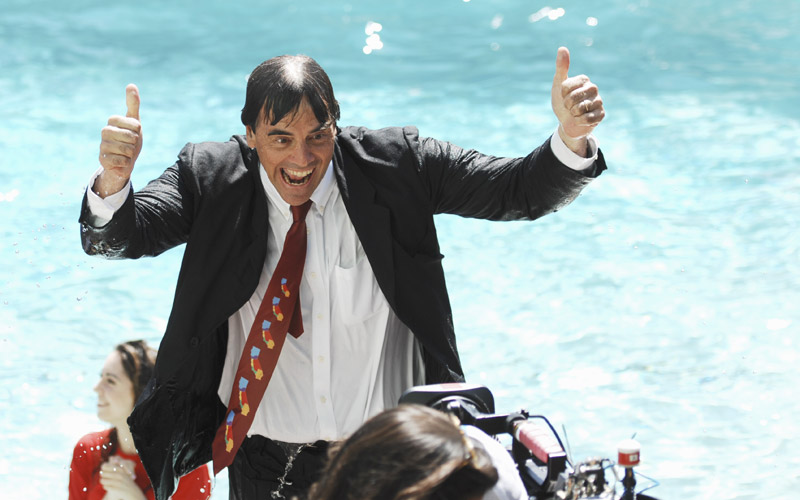 Draper University of Heroes and venture capitalist Tim Draper, after jumping in the pool. (Photo by Tim Neely/ABC Family)

Draper University of Heroes–that is its real name!–seems made for reality television.

The boarding school for budding tech entrepreneurs has an eclectic and bright environment (a renovated hotel) to the eccentric behavior of its billionaire founder (Tim Draper). There are challenges, sort of, and a “survival week.”

Students live together and develop crushes at the school, which has been compared to Hogwarts. Meanwhile, they’re in competition for millions of dollars in investment for their companies.

Yet Draper University was not made for television; it has existed since 2013. What seems both inevitable and genius–a reality show documenting what happens there–debuts tonight on ABC Family.

StartupU = the best of Shark Tank + The Real World

On StartupU, we’re quickly introduced to the program’s unconventional ways. This isn’t a typical incubator nor training program. The students’ first introduction to Draper is so awkward that it comes across as showing off for the cameras, even though it soon becomes apparent that this is just who he is. A lot of what happens at the school seems inspired by reality television.

ABC Family said at the summer TCA press tour last week that the network’s target audience is teenagers through 20-somethings–though because they are a TV network, they made up a name for those people: “becomers.” Those are people “trying to bridge the distance between who they are and who they want to become, and it’s a searing journey,” according to ABC Family president Tom Ascheim.

Perhaps because of that audience, the show felt a little like I was too old for it at first. Some of the choices, from the music to the on-screen graphics, make the first few acts more Disney Channel-meets-Bravo than I’d prefer.

But when the cast settles in to their actual businesses and work, Startup U opens up into a series that’s more Shark Tank than The Real World—or, more accurately, the best of both of those shows put together.

That is, watching them learn what is required to secure funding, never mind create a successful product, is fascinating and dramatic.

Rather quickly, the ideas—and the people behind them—take shape. There are various combinations of fascinating and terrible ideas, interesting and annoying characters. By the end of the first episode, I wanted to keep watching them develop their ideas, practice, fail, and learn. And, yes, the simmering drama and conflict between some of the students also drew me in.

How Startup U was filmed

The series was essentially shot like a documentary. Executive producers Tim and Mike Duffy of  Ugly Brothers Studios—their brother is Bar Rescue regular Brian Duffy—told me that, during the eight weeks, they filmed 15-hour days and six days a week, producing a total of 1,600 hours of footage. Cameras followed 10 of the 30 students who were accepted to the school, though they were accepted first and chosen to be on the show second.

Tim and Mike got the idea for the show after Tim read a New York Magazine article about the school. It took months for Tim Draper to reply to their inquiry, but when he did, they immediately went to the school and filmed for two days. “There was a show there,” Tim told me when we talked last week.

One of the challenges of filming something like this is finding and crafting stories from everything that happens. Mike said, “We believe as producers that we have to make sure that what’s happening on screen is life-changing, deserves to be television fodder. You don’t have to script everything, but you better make sure what’s happening in-scene is really entertaining and compelling, and that’s where the Startup U really popped for us.”

It was “entertaining and compelling” on its own–the perfect venue for a reality TV show. However, Tim Duffy told me what Tim Draper has been saying in interviews (calling it a “docu-series” instead of reality TV): “This isn’t a reality show like the way people view reality shows; there happens to be an inherent competition within the container of Draper University, but these aren’t reality show participants, these are founders of companies.”

Of course, it is the kind of show I wish people would think of as reality TV, because it’s, you know, real.

That said, the presence of cameras did affect the participants. Tim said, “It upped everybody’s game. Now they can’t hide behind the obscurity of not getting investment.”

Startup Up Founder Tim Draper was an especially compelling character. “He’s not driven by the money, he’s actually driven by these human interactions, and he truly cares about these kids,” Tim Duffy told me. “That what was crazy about it for us, honestly. As storytellers, you’re constantly looking for the truth behind a person who may be faking it when we put our cameras on them. This dude is not faking it at all, ever.”

Mike said Draper “basically already built a TV show format for us.” Still, they did choose what to focus on, starting with the cast and its diversity. “Silicon Valley is under 15 percent female in terms of active venture capitalists and founders,” Mike pointed out, but their cast is half men and half women. “Our goal was to really speak to the ABC Family audience in who we were picking, and also have a really cool range of ideas that they all had.”

Three female-skewing cable networks wanted the show, and Tim said they ultimately went with ABC Family because “we want to tell a positive story, because Draper U. is a positive story.” Startup U reflects that, even with a quickly emerging villain and natural conflict. But it isn’t forced nor orchestrated by producers.