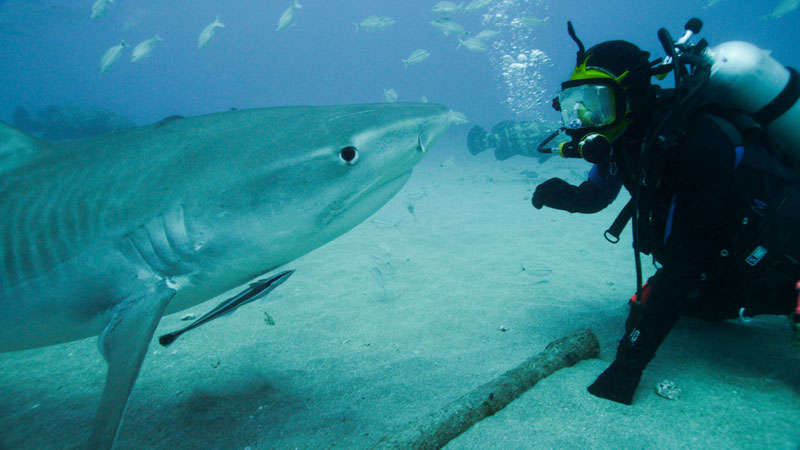 A tiger shark and Greg Skomal, who was featured in one of Shark Week 2015's best documentaries. (Photo by Discovery Channel)

But how did Shark Week do earlier this summer? Did the Discovery Channel live up to its promise to eradicate fiction? Was there a new commitment to science and scientists? And how did it do in the ratings?

The amazing news is that:

Shark Week critic David Shiffman graded all the specials and documentaries, reviewing them briefly, and his evaluations range from F to A+, even for specials that aired back-to-back. But crucially, there was no fiction pretending to be fact.

And Shiffman’s overall assessment was that it “was much, much better! Discovery listened to our concerns and made substantive, significant changes. There was more science and biodiversity this year, and less pseudoscience and fearmongering. A huge step in the right direction!”

The shows he graded in the A range are listed below, with links to watch. The worst shows, judging by grades of D or F, were Island of the Mega Shark (“non-scientists doing what they referred to as scientific research”), Return of the Great White Serial Killer (“lots of inflammatory language and questionable descriptions of shark behavior”), and Super Predator (“there wasn’t a mystery because scientists already knew what happened”). Super Predator, which Shiffman wrote “came dangerously close to megalodon nonsense,” was the most-watched show of the week, which is probably the worst news in all of this: audiences are attracted to entertainment, even if the science isn’t there to back it up.

But, overall, it’s significant improvement, and for the ratings to be up without what amounts to a fictional event movie kicking things off—that’s great news.