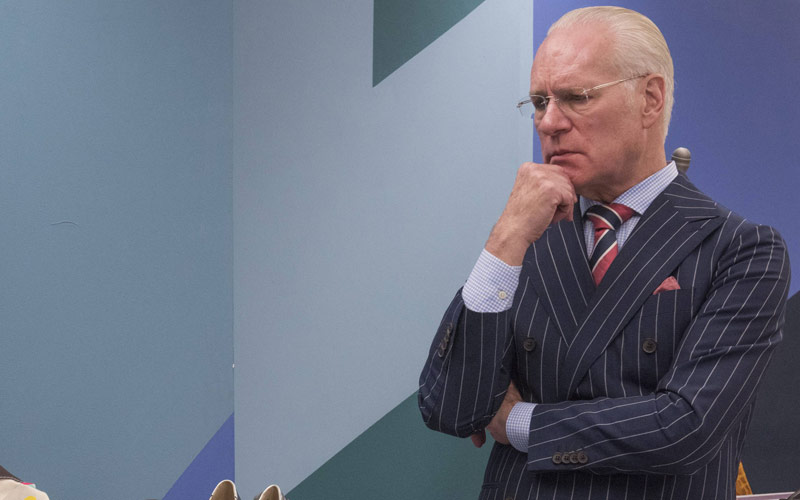 Tim Gunn is not amused during the Project Runway 14 premiere. (Photo by Barbara Nitke/Lifetime)

Previewing season 14 of Project Runway, showrunner Sara Rea told the Observer, “Well, to sum it up – it’s fucking nuts! Honestly, it’s a big roller coaster ride.” She added that “Tim was literally pulling his hair out at some points, and I mean that in the truest sense of the word. There are some great clashes and some amazing designs and it’s all just a really fun, wild ride.”

I hope the last three words turn out to be true, but the premiere episode didn’t engender a lot of confidence. The showed-way-too-much season preview that preceded the episode included Tim Gunn saying, “This group of designers really had me pulling my hair out,” and it’s not hard to see why.

The show itself is in fine form, as always, though in its first few acts, it had too much of the flood of exposition that plagues other talent competitions: I saw Heidi and I thought, I wonder what Heidi is going to say. I am standing looking at Tim Gunn, who is standing in front of me. I wonder what will happen literally the second after this clip of me wondering what will happen–which I recorded long after the thing happened–ends.

As to the work, well, it was not great. First, three of them showed up without their sewing kits, so they had no tools to work with, all season. (I guess the show can find sponsors to put their names on walls but not on sewing kits?)

At the end of his rough consultations, Tim told the designers collectively that they had “a big lump of coal up your rear ends,” and that they better turn it into diamonds. Few did; Ashley’s winning piece was easily the best of these.

There are signs of hope from the cast that apparently will drive Tim Gunn to baldness.

I especially like Hanmiao Yan, who told us that she was from New York but “made in Chin,” and said she likes to call herself “pistachio” because it translates to “happy nut.” She also is the kind of designer who just does her own thing, and that usually works out well, or at least produces more interesting results than a lot of the other work. (I did not think her piece was the second-worst. Bad? Sure. Creative? Yes.)

The bad work does makes Tim Gunn more entertaining, starting with his coal-in-the-butt admonition. For example, he said Blake’s dress had a weird part that “looks like a receptacle, like she puts her lunch in it.”

But as he told another designer, “it’s the antithesis of joy–it’s just dreary.” That’s what a season of bad work and drama instead of talent can produce, so let’s hope the designers clench hard and give us some diamonds.