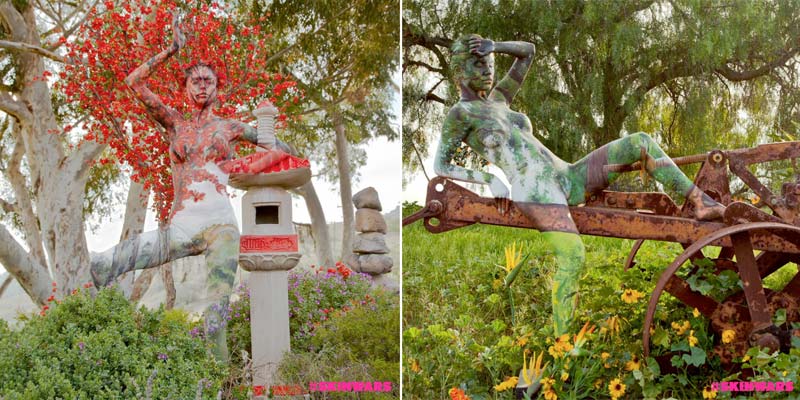 “Zen Garden” by Aryn Fox and “Farm” by Avi Ram, both of whom are Skin Wars finalists.

A few years ago, cable networks couldn’t produce new talent competitions fast enough. Led by Bravo’s success with Project Runway and later Top Chef, competitions rained down from Hollywood. Although several remain on the air, their reign seems to be over now. Top Chef, which used to be on year-round with its spin-offs, now only shows up once a year to interrupt Bravo’s parade of rich assholes.

So let us appreciate GSN’s Skin Wars, which is about as basic version of this format as possible, works really well as a competition. Its artist contestants are body painters; they’re canvases are naked women, usually. Its contestants are talented and sometimes engaging, often annoying.

The show is a very by-the-numbers, low-budget competition; there’s nothing entirely new here. Yet it’s also looser, more casual, and better for that. My one major complaint with Face Off is how identical it is, episode to episode, season to season. The host’s dialogue, the beats, the act breaks—it’s like walking the same path and stepping in the same places.

Skin Wars feels fresh. Though the show rarely leaves the studio, the challenges are varied, and test the contestants in different ways. And the work–wow. It’s dynamic and expressive, and so interesting. Just look at some of it:

Though the art shines, the real star power comes from its host, X-Men star Rebecca Romijn, and series judge RuPaul Charles, out of drag. Their presence on a small cable network’s first competition show is surprising in the same way the show is surprising, a star on a network that also airs Idiotest, and I’m convinced the real test there is for viewers who subject themselves to that. But I digress!

RuPaul is actually going to be hosting a one-off spin-off GSN will debut next week, featuring first-time body painters competing while being mentored by former contestants. It’s interesting to see him here, still full of life and personality but without the persona. As a bonus, he and the other judges come around for the quickfire challenges, and even when they’re behind a desk, they offer decent critiques.

Tonight, GSN debuts a brand-new competition, Steampunk’d, which is apparently an interior design competition but with steampunk elements. GSN has already contributed one solidly entertaining player to this subgenre, and perhaps they’ll have another in this new show, too.