Most of Bravo’s programming has become versions of The Real Housewives, with rich people acting like assholes for our entertainment, and its series Below Deck is no exception.

It’s The Real Housewives on a yacht, with the same requisite drama. But there are two major differences: One is that this is an actual yacht and the cast members are actually working.

The other is Captain Lee Rosbach, who is about as far from a typical Bravo star as you can get and still be on Bravo. I talked to him about the show’s third season and what it’s like to be the captain of a crew hired by a production company.

Rosbach became captain on the show because the yacht he captains was chartered by the production crew for the first season. It has changed his life, he told me. “I get recognized a lot more and I get asked to do a lot of things like we’re doing now. I’m having a lot of fun with it; I’m enjoying it. If I didn’t have the opportunity to do it, I would have missed out on something special.”

Although they chartered a real yacht with a respectable captain, production company 51 Minds is not making a documentary about yachting, they’re making a Bravo reality show, and that means they cast for both guests and crew members.

Selection of his crew is entirely out of the captain’s hands: “that’s something that they handle,” he said of the producers. However, all crew members are required to be licensed and certified.

“Each of the crew members has to have an STCW, which is a standard set by the maritime industry for watch-keeping and just being on board—it’s basic first aid, firefighting,” he told me. “It’s a two-week course and a certification they have to have before they’re allowed to work on yachts.”

However, Rosbach can fire the crew once they’re on board.

“I can’t speak directly to if anybody gets fired or something to that effect, but I can tell you that I do have that authority, yes,” he said. Captain Lee also told me “any time you bring new crew on board, whether it’s for a TV series or whether you’ve lost some of your old crew—which happens quite frequently in yachting—you’re bound to go through some changes, and adaptations are going to be made.”

They’ll be joined by a new group of Housewives—er, crew members:

The production crew doesn’t live on board but stays near where the yacht is traveling. “They are centrally located,” Captain Lee said, “and we transport them back and forth every day. The only people that are allowed to sleep on the yacht are the crew and the guests.”

How many people are on board “varies,” he said, based on what’s happening that day; underwater filming, for example, would require additional crew. But it averages eight to 10 production crew members on board.

How real Below Deck’s drama is 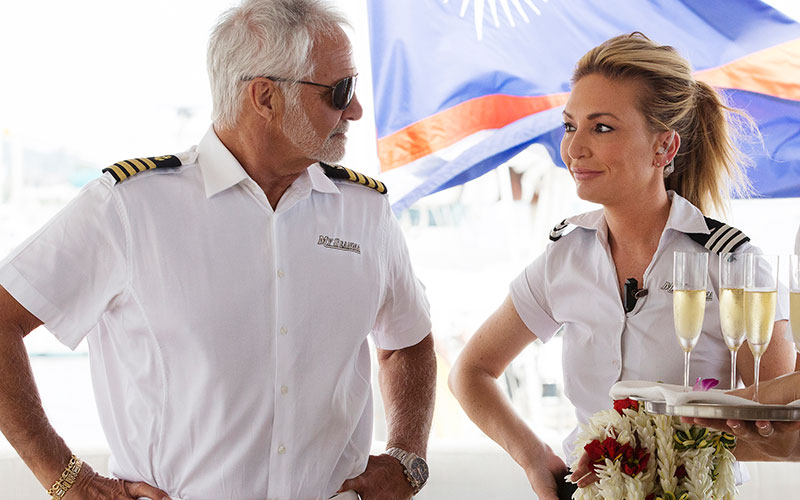 Captain Lee Rosbach and Kate Chastain during season 6 of Below Deck. Both are back for Below Deck season 7. (Photo by Greg Endries/Bravo)

Captain Lee Rosbach watches Below Deck at the same time everyone else does, and says that the edited version is “a pretty accurate snapshot, I really do,” he said. “What happens happens and it’s all caught on film.” But there are also things he’s seeing for the first time.

“Hell yes, I’m surprised,” he said. “I think one of the biggest lessons that I’ve learned since I started doing a series is that a captain who thinks they really, really knows what goes on with his crew all the time is fooling himself, because he doesn’t.”

When I asked for examples of what surprised him the most, he said things like “crew staying up later than they should, that sort of thing, or drinking more than they should. You can’t police everybody 100 percent of the time, and no captain’s going to stay awake 24 hours a day to make sure his crew does the right thing. There’s going to be some things they’re going to get away with, and you’re going to find out about later. You almost always find out, but a lot of the times it’s after the fact.”

Despite the surprises, he described Below Deck‘s drama as “typical” of the yachting industry.

“Some people may disagree with that assessment, but you’ve always got drama on board a boat,” he said. “Any time you get people that are living and working together in that close proximity, you’re going to have issues and things are going to happen, and drama’s going to ensue. It’s been that way in yachting for years, long before the series came around.”