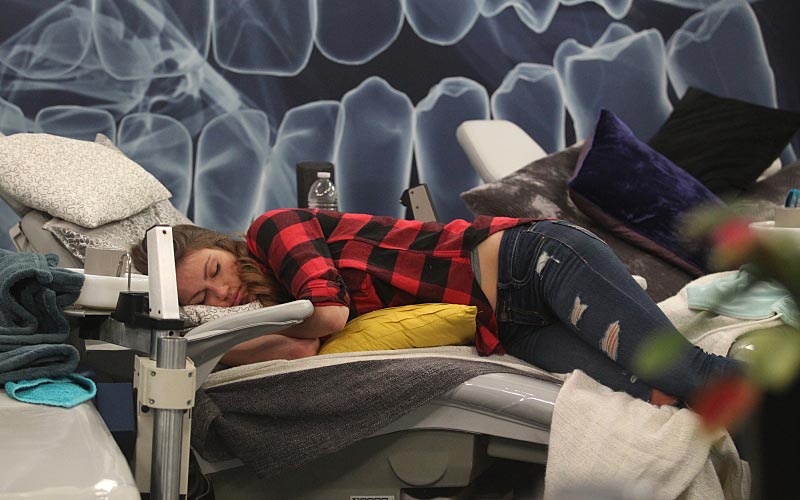 Becky naps in the have-not room, which uses a dental x-ray as its wallpaper--and it's upside down, according to houseguest John, who's a dentist. (Photo by Sonja Flemming/CBS)

As someone who cannot count to eight successfully and who is a terrible copy editor of his own work, I understand that errors are a fact of life. Or at least, that’s what I tell myself.

Still, it’s remarkable that Big Brother 17, a major network television production with a multi-million dollar budget, has screwed up at least 47 times so far. Among the errors are misspellings, errors in critical information, and technical goofs. Our friend Hamsterwatch has kept track of these on Twitter and in the ever-useful footer of her daily recaps. While she praised the technical feat of the double-eviction live show, she also wrote:

“…the Goofs Tally below is a shambles this year. It’s riddled with basic spelling errors and the kinds of BB mistakes that even the most casual fan knows are wrong. I simply don’t understand how a major media outlet and public corporation can be this sloppy.”

For example, on social media and on screen, the production has misspelled its cast members’ names, confused twins and other houseguests, and used “your” instead of “you’re” in subtitles. They’ve also shown crew members on the live feeds.

Sure, those are relatively minor errors, but Big Brother has also gotten these things wrong:

On a show with so many time constraints, errors are inevitable. Yet Big Brother has found the time to erase a veto in a pointlessly reused footage and, separately, digitally erased a whole person from an inconsequential scene. Maybe that takes less time than checking what day the show and the advertising that pays the bills is on television?