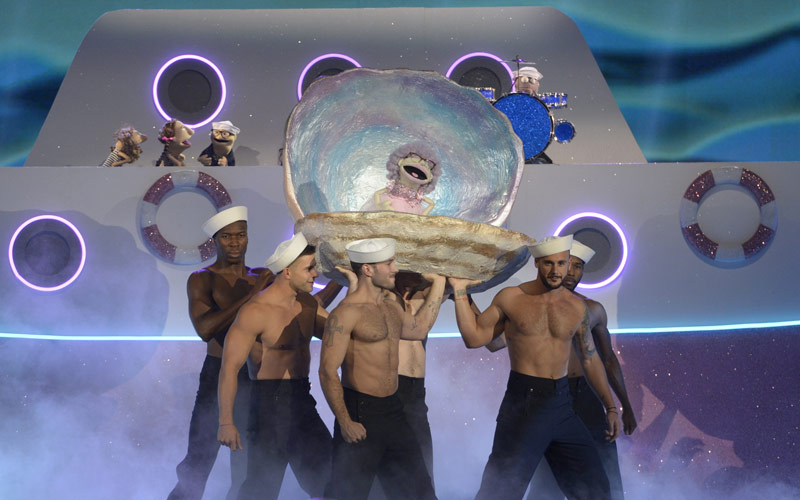 Ira and Miriam, puppet contestants on America's Got Talent. The shirtless men are not puppets. (Photo by Virginia Sherwood/NBC)

Only 450 votes helped to save a puppet act on America’s Got Talent: Ira and his mother Miriam Fennelbloom were saved by the Dunkin Donuts Google search live vote, which is actually a thing.

America’s Got Talent has committed to Ira and Miriam as puppets; even their intro packages are shot as if Ira and Miriam are real people. So if you don’t want the illusion shattered, stop reading now.

The people concealed behind the screens are also behind even more-famous puppets: they’re performers from the Broadway smash hit Avenue Q. Specifically, they are Howie Michael Smith, who performs Princeton and Rod, and Christian Anderson, who performs Nicky and Trekkie Monster.

In an interview with Broadway World, they said they auditioned because:

“We wanted to do a television series with puppets and thought what better way than to see if we can develop some dynamic characters on AGT with one of the biggest audiences on TV?”

“I had the Ira puppet lying around from another project and when this came up I saw him and thought he looked so shy and meek and that it would be funny if he sang with a big rock voice. … When I auditioned live for the producers they wanted to hear more about the mom. They asked if I had the mom puprsapet [sic] I said no, but I’ll build her.”