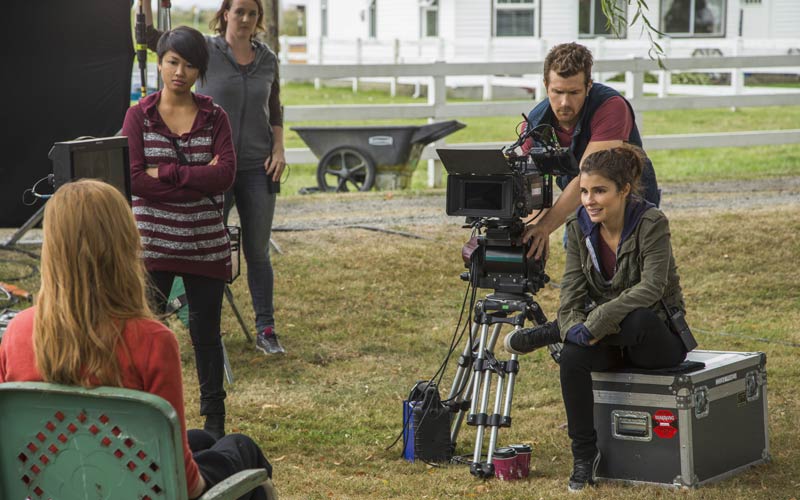 A contestant interviewed by Shiri Appleby's character Rachel is filmed by Josh Kelly's character on UnReal. (Photo by James Dittiger/Lifetime)

Lifetime has, rather surprisingly, renewed its drama UnREAL. The fictional series, clearly inspired by real events, is halfway through its 10-episode first season, with the sixth episode airing tonight.

Ratings haven’t been high–Variety reports that “its most recent episode spiked 66% to a series-high 0.35 rating in adults 18-49.” Spiked 66% to a .35! But Alan Sepinwall notes that, besides great reviews, “it’s also the channel’s youngest-skewing scripted series ever,” with an average age of 43.

Bad title aside–and I’m not just talking about the stylization–I found UnREAL to be a strong drama that also offers insight, even when slightly exaggerated, about how The Bachelor and similar shows are produced. (At least at first, it most definitely was drawing directly from the ABC show, which is no surprise considering co-creator Sarah Gertrude Shapiro worked on the show for nine seasons.) As unethical and horrible as some of the behavior by the fictional producers can be, they aren’t one-dimensional characters.

If you haven’t yet given it a try, read my review and then catch up by watching episodes online, free.