After two of the men of The Island caught a live caiman and tied it up, one of them, Jud, told the camera, “This is like five steps removed from my expectation.” His description of his experience also describes my experience of the NBC series, which had a weak start but quickly surprised me.

It started with 14 people and nine remained when Bear Grylls showed up in his produce placement, self-branded clothing to pick them up. The exits were mostly medical, because there was ever-present danger and a few really horrific injuries, from a scalded face to a feces fiasco (Trey: “You haven’t truly lived until you’ve spent two-and-a-half hours digging four to five pounds of coconut, bark, and crab shell out of your own butt”).

Although the series was framed as being filmed by its participants, it was more like having a small crew of producer/camera operators on camera. The four of them–Matt, Rick, Graham, and especially Benji–seemed like de facto leaders, both in terms of survival and production of the show. Their work was impressive, especially considering the conditions and the frequently hostile attitude some participants had toward filming certain moments.

Like Naked and Afraid, the conflict that emerged was organic and felt appropriate for the situation. Toward the end, Daktoa and Jim separated from the group, showing up for meals–or what qualifies as a meal–but staying at the group’s original beach camp. The larger group creating a shelter with beds became an interesting point of contention, with Dakota and Jim mocking the shelter. This wasn’t quite Jack and The Choirboys versus Ralph and Piggy, but watching the group divide and two of them isolate themselves for a while.

Most surprising of all was how The Island spent considerable time on significant issues that, on a prime-time reality show, rarely get more than fleeting lip-service. The finale included in-depth conversations about being too attached to our phones and other technology, and also the ethics of killing for food and our detachment from our food supply. (Tangent: Whether you’re a vegan or a hunter, I highly recommend this book.)

The caiman ended up food; Graham asked to kill it with a knife, “precisely so it’s seared into my memory every time I go to a grocery store,” he said. “We can’t be blind to what we’re doing when we eat a cheeseburger.” Impressive and yet still horrifying to watch as he drove a knife into its skull.

It’s unfortunate the show will be replaced on NBC’s schedule with Running Wild with Bear Grylls, which if it’s anything like the first season, is far too controlled. The celebrities who spend a few days with Bear occasionally find themselves in challenging situations–I’m thinking of Channing Tatum attempting to sleep next to Bear on a tiny ledge on the side of a mountain–but it most feels like the route and activities have been well-planned. It’s produced and predictable in a way The Island never was.

History’s Alone is the opposite of The Island

Thankfully, there’s another underproduced and unpredictable survival show also airing: Alone, which is somewhat the reverse of The Island. It follows 10 men isolated on cold and rainy Vancouver Island, each filming themselves as they try to outlast the others. 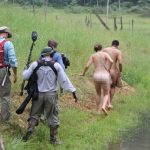 Behind the scenes of Naked and Afraid

It’s hard not to see these shows as answers to Naked and Afraid, which wasn’t the first–Survivorman Les Stroud was the pioneer, starting his self-filmed show back in 2004–but the success of Discovery’s series seemed to give others permission to do create similar shows.

Both shows have male-only casts, which may be a play to increase male viewers, but ultimately serves to reinforce the stereotype that men are capable of this kind of thing and women are not. Of course, Naked and Afraid‘s female participants have often proved to be more proficient than their male partners, so I’d love to see future seasons of both shows include women.

There are two primary ways Alone differs from other survival shows: First, there’s strong external motivation, $500,000 to the last remaining survivalist. History is a little full of itself in its promotions for the show, framing it as “no gimmicks” ($500,000 sounds like a pretty big gimmick to me) and as “more authentic than any other survival program out there.”

Second, the series is framed as horror, from the music to the editing. It could easily be a found-footage horror movie, with something starting to pick the survivalists off one by one.

Of course, this is real, and while the tense and frightening tone seems a little overwrought sometimes, there are real fears of bears and cougars. And there is terror: night vision footage of bears outside a frail shelter, filmed by a motion activated camera, while a 31-year-old survivalist grips an axe behind a tarp.

Despite that kind of tension, Alone can be slow and drag. I appreciate a quiet, reflective, deliberate show, and might almost prefer it to one that creates too much frenetic energy in its editing, but I found myself occasionally losing focus. Since the participants film themselves, there’s a lot of shaky camera footage and similarly framed close-ups of their faces. Establishing shots and b-roll of the landscape help, but there’s a degree to which it all blends together and it’s sometimes even difficult to keep the participants straight.

Still, watching the participants navigate survival with minimal supplies and no human contact makes for a strong hour of television–one that can be surprisingly emotional or hilarious, like in the clip below. While everything from pre-production planning to the editing contributes to its success, both this and The Island stand as strong examples that entertaining reality can come from minimal amounts of interference.