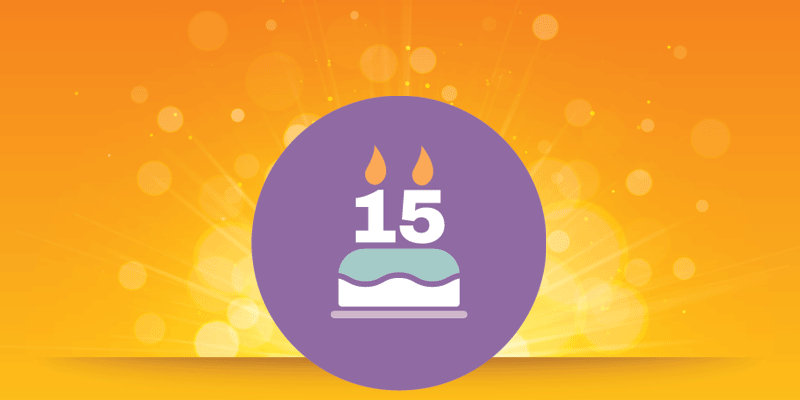 Walking down Michigan Avenue, my 1.5 mile commute home, is when the name reality blurred occurred to me. As I passed department stores and tourists, and the waves of city smells, the name just sort of slipped into my head. I went home and registered the domain name.

Alas, that’s all I remember from the birth of this site 15 years ago. I have a fragment of a memory of doing some web design, modifying another site I’d been playing with. But I don’t remember publishing the first post, or making the site live, two days later, on July 8, 2000.

I do remember being fired from the recap column I created and wrote for one season by an editor new to a now-defunct web site that I’d interned and freelanced for. As a digital hoarder, I even still have the e-mail message from June 7, 2000: “we decided to assign the ‘Real World’ column over to another writer.”

As thrilled about that failure as I am today, because of all it led to, I remember the void that left in my life. And I certainly played a role in causing that to happen. I no longer had a place to digest what I was watching and connect with others who were watching. Back then, that connection only came in the form of e-mail messages, which I still have.

Thankfully, the Internet of 2000–a different, smaller Internet in so many ways–made it easy to rebound, and in less than two months I decided to start the site you’re now reading. If only I remembered anything else about that time!

How funny that those key moments in our lives can drift away yet far more trivial things can remain. Perhaps my brain didn’t think of it as critical information (I just saw Inside Out, a phenomenal film, so now I’m imagining marbles pushed into a chasm and turning gray).

After all, there’s literally no way I could have imagined what creating a site on Blogger that was hosted on Tripod would eventually lead to. I never really imagined it as having readers, but within days it did, and within a few months, there was a review in EW.

15 years of reality TV, together

Virtually nothing in my life is the same as it was 15 years ago–the desk, the computer, the apartment, the city, the lonely nights where television filled a void yet also allowed me to connect with others, they’re all gone. But here I am, sitting in front of a screen, typing.

reality blurred has evolved over those years.

It was initially born as links with summary, commentary, and snark. I modeled it after what Jim Romenesko was doing, applying the template he created to completely different content.

Since then, it’s evolved into original criticism and reporting, and now even contributions from you. I’ve never had a grand vision, but instead just followed my instincts, writing about what inspired me or inflamed me. I’ve experimented with different formats and posts, and redesigned more than once.

I never expected to be producing reality blurred today.

And I certainly never imagined that some of you would be with me for this entire 15 year ride. I am beyond grateful for that, just as I’m grateful every time someone visits and reads something I’ve written–never mind leaving a comment, sharing a story on social media, or answering a survey question.

Thank you for all those things, and for being on this unexpected journey with me, however long you’ve been part of it. And happy 15th, reality blurred. I may not remember your birth all that well, but I am thrilled you’re in my life.