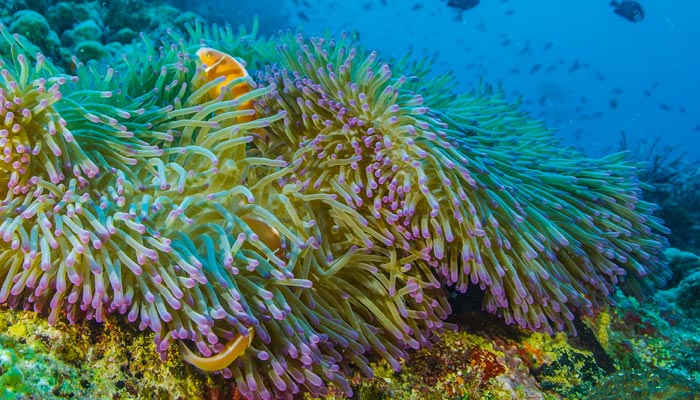 A pink skunk clownfish hiding in an anenome on PBS' Life on the Reef. Photo by Jon Shaw/Eye Spy Productions)

Tonight, PBS airs the second episode of Life on the Reef, a three-episode series that explores the Great Barrier Reef with the same kind of care and sensibility the BBC brought to Planet Earth and Frozen Planet.

I never get tired of television shows that teaches me about complex things using beautiful imagery, and from what I’ve seen of it so far, that’s exactly what this series does. The footage is often incredible, from extreme close-ups to epic sweeping shots of the reef. (Episode one is online.)

It was produced by Australian production company Northern Pictures and aired in Australia earlier this year. The episodes are organized by season: winter, spring, and summer. Here’s how PBS describes it:

“The documentary examines the array of life in and around one of the planet’s most extraordinary and endangered places, Australia’s Great Barrier Reef, and the efforts to protect it.

Amid the fringing reefs, coral cays and islands of the Torres Strait, the human residents living on the Great Barrier Reef seek to find the critical balance between their needs and those of a diminishing natural world.”