On Hoarders, organizer Dorothy Breininger often pushes a person in crisis to make tough decisions about things that are destroying their lives. But she also sees herself as the protector and defender of that stuff: she cares about the trash that everyone else wants to throw away. Why? Isn’t that the exact opposite of what organizers should be doing?

Dorothy is back doing that on television now, since Lifetime resurrected Hoarders after an absence of almost two years.

“I really thought Hoarders was done,” Dorothy told me when we talked recently. After it was cancelled by A&E by A&E, she said, “we were never really sure that it wasn’t coming back, but after a year, we all just went on.” She pitched other TV shows and also started working with Zillow. “All the sudden my calendar is chock full, and then, we get the call.”

Thanks to highly rated reruns that earned a follow-up episode, Hoarders was back–and so was Dorothy, one of the unscripted series’ original organizers. She’s actually been involved with the series since before it was on television.

How Dorothy Breininger got involved with Hoarders

More than a decade ago, Dorothy spent a year and $40,000 of her own money helping a 76-year-old in the Los Angeles area avoid jail by cleaning his hoard. The ensuing publicity brought her to the attention of the show’s producers, who brought her in during pre-production to “train the producers on what hoarding is like.”

She also helped them figure out “whether or not it was even appropriate” to have such a television show. Talking about “exploitation versus education,” she admitted that it’s impossible to avoid the former entirely. “There’s a modicum of exploitation any time you go on television; that’s just the way it is. I think what we’ve noticed, when there’s a crisis, there’s nowhere else to turn.”

Hoarders is there for those people, and it has also made a difference in the lives of those who haven’t appeared on TV. That’s because hoarding now has its own classification in the DSM-V, and Dorothy said, “I absolutely credit to the show” for that shift in both public and medical consciousness. She notes, however, that Drs. Randy Frost and David Tolin “really put hoarding on the map. They were talking about it before Hoarders ever came out. …However, when you have millions of viewers tuning in, suddenly the profile of the disease shifted,” she said. “It just used to be part of another disorder.”

On its new network, Lifetime, the show now has a subtitle, “Family Secrets,” that reflects something we saw many times in its earlier A&E life. “What we’ve been noticing over time is that so many family members never even knew,” Dorothy said. “They haven’t been allowed in the house for 5, 10, 25 years.” Now the family is coming in, as are organizers like Dorothy, plus television cameras.

Dealing with people in crisis on television

On the phone, talking to me, Dorothy had the same level of exuberant, joyful but also intense passion that viewers of the show know well. She’s upbeat but tough; honest yet compassionate; and full of energy even in the lowest moments.

“Anybody who reaches out to a television show to expose their health and their lives and to say that they hoard, has to be in crisis,” Dorothy said. “Nobody wants this to be revealed. Nobody.”

Her approach to dealing with people in that situation, Dorothy told me, for to create “a feeling of dignity around their stuff. I have to care about it for them. Everybody else in their world tells them to just light a match to it, and they have to have one or two allies, and that’s usually the therapist and the organizer.” She added, “I can do a lot of therapy, but I don’t have a PhD behind my name,” so she and the therapist partner and talk frequently during the clean-up.

The goal is to create a “seriously safe place, and then we press them.”

That process starts before she’s on camera. After a hoarder and family have been selected for the show, Dorothy learns that she’ll be working with them and when the episode will be filmed. She said that, unofficially, it seems that each of the regulars tend to be assigned certain kinds of hoards. “I tend to get children and older people,” while Matt Paxton “gets all the ones with poop.”

Before arriving, Dorothy told me, “I think it’s necessary to call the person before I get there. If I sound like their Great Aunt Ruth and their Great Aunt Ruth used to drive them crazy, there could be some negative reaction. I have to build trust in a matter of hours, and then I have to deal with their stuff. And if they don’t like me it’s not going to work. Let me change that: if they don’t trust me it’s not going to work.”

At a hoarder’s home, Dorothy first does an off-camera walk through. That takes place on what’s basically day zero of production–the same day the therapist tours the home and the crew gets shots of the hoard, but the day before the actual work begins.

The off-camera work of a Hoarders organizer 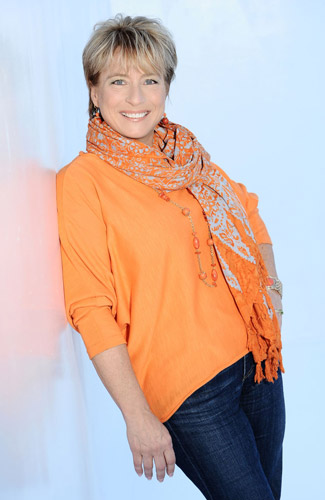 After talking to the person, asking them “what they want the most” at the end of the process so she can focus on that, Dorothy goes to work creating a detailed plan. “I design it, and it takes hours and hours and hours, sketching and writing and putting down how long I think it takes to do half a living room,” for example. “I react and organize according to the crisis at hand.”

That planning process is very involved. “Do we need tow trucks? Do we need an auctioneer? Do we need a hazmat crew?” She’ll make requests from the production team.

The actual cleaning starts the next day, and, of course, has a lot of starts and stops. “We spend so much time bringing everything out of the house, and then looking at it together with them,” she said. “They resist and they hold on. This is their stuff, this is their family, but it wears on them. And the therapy, in many cases, not always. The fighting–that has to happen, because all those emotions have been bubbling up.”

Often, the show makes it seem like there’s a breakthrough in the final hours and that’s when work really happens–and Dorothy said that’s often true. They tell the hoarder, You have this crew and people for five more hours. “What are you going to do with it?” That “crisis is so effective” because, she said, “a lot of these folks, part of the disease of hoarding is, I’ll get to it tomorrow. It’s that procrastination.

After two days of emptying, trashing, recycling, selling, and whatever else, the show brings in a cleaning crew. “When it is appropriate, we will do a reveal,” Dorothy said. The criteria include “if the house is stable enough” and “if the hoarder has done enough, we can do a little bit of a makeover to give them hope.” If there are kids in the house, “certainly it’s where we give a child their bedroom back.” But despite those high moments of showing a clean, livable home, “sometimes we end the shows in a very sad away.”

Staying connected with people she helps

“I still get calls from many seasons ago, where people say, Guess what? I painted it. I sold it. Guess what? We divorced.” Dorothy added, “there’s just something about being dropped into somebody else’s life. It’s not just the experts, every single camera person and every single audio person” forms a connection with the episode’s subject. “We give lots of hugs,” she told me, and when the crew leaves,  “I know they feel a sense of emptiness. In most cases they’ve never had such tender care.”

That connection extends between the cast and crew, too. Since most of the therapists, organizers, and behind-the-scenes crew returned, “it was super easy to get back into the groove again,” Dorothy said. The crew knows what to expect from her, like how “the sound guys know that they’re going to be dealing with Dorothy who goes from soft to loud.”

Now that they’re back in that groove, Dorothy said, “we’re filming a lot–we’re dong a ton of episodes, just loads of them.” Even with the often challenging work they’re doing, she insisted, “it’s really exciting and loving.”