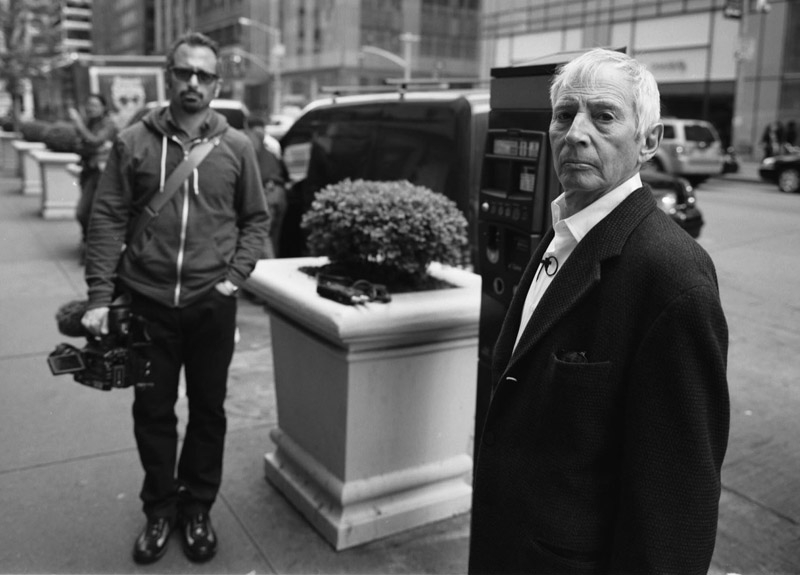 The Jinx director Andrew Jarecki and its subject, Robert Durst. (Photo by HBO)

You may recall that, after The Jinx aired its finale–its wonderful, incredible, dramatic finale, the perfect capstone to a terrific season–there were questions about its narrative. In short, it seemed like director Andrew Jarecki and producer Marc Smerling had played with the timeline, reordering events to create more narrative tension.

After several interviews the morning after the finale went not so well, all interviews were cancelled (including one I’d scheduled).

So I was so excited to see Variety’s interview with Andrew Jarecki and Marc Smerling published Tuesday afternoon. Finally, they were talking! At long last, answers!

Yet the Q&A–by executive TV editor Debra Birnbaum, who you may remember from this–contains nothing but softball questions. I don’t think it has to be aggressive or confrontational, but there is not even a single question about the questions and criticism that followed The Jinx’s finale.

That is just absurd.

Instead of questions about how they constructed their nonfiction art, they get asked questions such as, “What do you like about working in the medium of television?” and “Do you think you’ll continue working in television?” The closest to a question about the controversy is not at at all a question about the controversy: “Could you imagine when you started this project that it would become such a topic of conversation?”

There are more probing and thoughtful questions on popsicle sticks.

Worse, Jarecki and Smerling’s reason for cancelling interviews–after they’d done several interviews–was “it is not appropriate for us to comment further” because “we are likely to be called as witnesses.” Yet in Variety, Jarecki unambiguously discusses Durst’s guilt. He says that  when they watched the finale, “we had Kathie [Durst]’s family with us, it was so emotional for them. For the first time they got to see the person who killed their dearest relative admit it.”

Wow. So, is he no longer concerned about being called as a witness? That’s something to ask or at least mention considering how critical that excuse was a few months ago.

Can you tell how frustrated I am to read such a puff piece?

Should anyone else be given access to Andrew Jarecki and Marc Smerling, I humbly suggest a single, easy, non-confrontational question to ask them: Why did you change the actual timeline of events in The Jinx’s version of the story?

Eventually, we may get an answer to that question, unless the next person who interviews them would rather talk about their favorite flavors of ice cream.