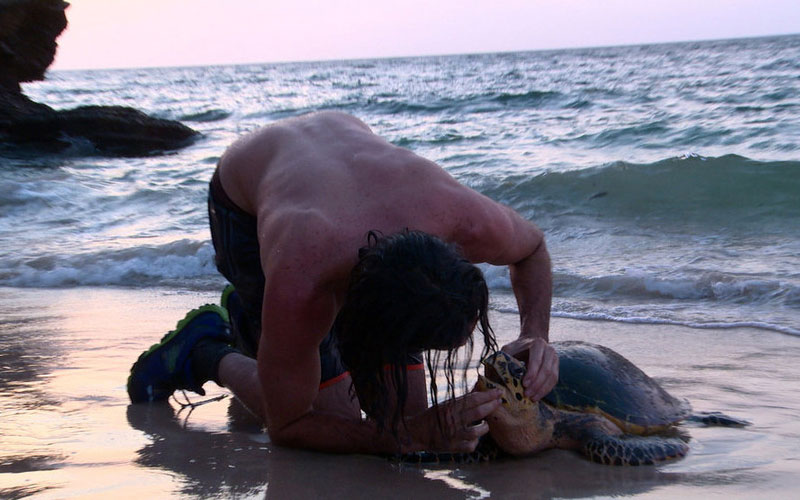 The Island camera operator Benji Lanpher about to give a turtle CPR. (Photo by NBC)

What happened on last night’s episode of NBC’s The Island is something I never, ever could have expected or predicted: turtle CPR by a camera operator.

That scene was so incredible–the turtle CPR actually worked!–as was the fact that we were watching someone who’s ostensibly a crew member break out as the show’s star.

I don’t mean to detract from all the men’s experience or efforts, and they seem to be quite connected by their experience. And part of the conceit with The Island is that there is no production crew on location, just camera operators who are filming as they go through the exact same experience as all the other cast members. The show has introduced them in the same way it introduces all its cast members.

Still, for two of the three episodes now, all of the show’s embedded camera operators have played a central role in the action and decision making, and that’s especially true of Benji Lanpher. Last week, when all of the cast was suffering from dehydration, he kept filming despite threats from other cast members who wanted to protect one of their own. Benji, who also shot for Vice and Life Before Zero, later defended their need to tell a full story once the experience was over.

This week, he literally blew air into an endangered turtle’s mouth.

With his help and leadership, they set up a net to catch fish, but instead the net caught–and injured, it seemed–an endangered sea turtle. They brought it to shore, but it looked like it was dying. Cue Benji, who literally picked up the turtle’s head, placed his mouth on its mouth, and gave it CPR.

And it worked. The turtle regained it strength and eventually swam away, which was gorgeously shot by the same people who were helping the turtle.

So yes, Benji is a bad-ass. Also, your honor, one more piece of evidence that he’s the series’ break-out star: he lives in a fucking castle and jumps from its walls into the pool wearing tights.

The rest of the episode was, compared to week two, somewhat less dramatic, though still better than episode one’s bickering. I say that even though Davion was evacuated by helicopter after falling on his back, potentially having injured his spine.

The editing took care of moments that weren’t actually as consequential, throttling up the music and the tension. That was especially true when a group went to retrieve an abandoned camera and water. (There’s Benji again! Last week’s episode ended with a cliffhanger, as Benji and Graham, another embedded camera operator, got caught in tides and darkness returning from a water run). That hike that involved climbing up and over rocks and left me pausing the episode out of fear one of them was about to slip and die.

So far, we’ve learned that the island is dangerous, turtles can be saved by human mouth-to-mouth,  Bear Grylls series without Bear Grylls are much better than ones with him, and that camera operators can become stars of the shows they’re filming. They’ve always been stars, just unseen ones, because without them standing in the water on Survivor or filming The Real Housewives fighting at brunch, we wouldn’t have any reality television.