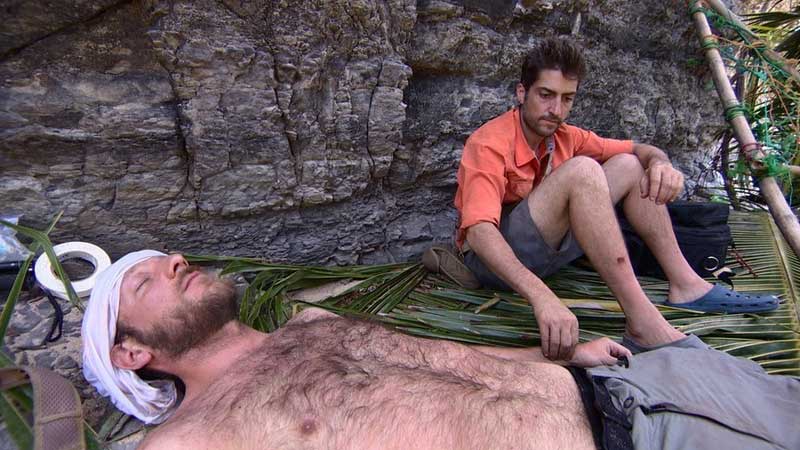 Fire ants took down camera operator Rick on the second episode of The Island. (Photo by NBC)

The Island with Bear Grylls got very interesting in its second episode, which for me was a huge improvement over the first episode. The lack of fresh water lead to dehydration; threats of suicide and murder; and conflict over the actual filming of the series. While last week seemed like tiresome, childish bickering, this was more like reality TV Lord of the Flies.

The majority of the conflict and drama came as a result of one of the show’s most-interesting choices: not having any production crew on the island, just camera operators who are cast members themselves. Pre-taped packages about the cast members introduced two of the camera operators this week because they were central to the story.

Without water, the group began to fall apart, and Mike, who’s raising his children because his wife died of breast cancer, suffered from extreme dehydration. Bear Grylls appeared to lecture us about how dehydration can cause brain cells to die. (By the way: He just annoys me, like Curtis Stone, because even though he’s knowledgeable, it just sounds so condescending.)

“Just give me my dignity. I don’t want my kids to see,” Mike said, breaking down. Davion, another participant, told the camera operator, “Turn that camera off. Turn that fucking thing off. … Know what my job is here? To keep these [bleeped] in line so nobody gets permanent damage.”

Yet though they turned off most of the cameras, they left one filming, so there was footage of most of this. Mike, who had a knife, was using it to threaten himself and others in his delirium: “I’ll kill you.” “I’ll kill.” “I’m not staying here. I’ll kill myself.”

“You’re not being shot at all. Just so you know that,” another participant told Mike, while a camera surreptitiously filmed. Then he realized that something was amiss: “Is that camera on here?”

Because there was so little coverage of all this, it was hard to keep track of who was talking or what was happening. But the camera was discovered and we heard Davion say, “I will chuck that thing in the ocean.” The next thing The Island showed was the medical team coming in to evacuate Mike.

All of this was edited tightly and there was a lot of tension, especially since it cut to two other men, who’d finally found water and were racing to get back to the dehydrated group.

A debate about the ethics of filming reality TV

Later, the men discussed what happened. Camera operator Benji said, “There’s a certain amount that we have to come back with to tell a story. Telling that story is going to be that much better with those shots.”

Davion said, “All he wanted was dignity and you guys didn’t want to give it to him. And I have a huge–I’m not happy with you.”

Davion has a really interesting point–especially since the show ultimately did use the footage and audio of Mike’s breakdown and threats. The conflict drew out the tension between production and participant, even though they’re all supposed to be one group.

I was pretty uncomfortable watching Mike’s breakdown, both because he was suffering and because he was being filmed but told that he wasn’t. That just seemed wrong. However, he now says he’s okay with it, even happy, and it’s good to know he’s both okay and okay with the footage being used. Here’s a brief Twitter conversation between him and camera operator Benji, who says “we were out of our minds”:

The camera operators were at the center of other drama, too: Camera operator Rick was bitten by fire ants and his throat began to swell up. The episode cliffhung on two camera operators, Graham and Benji, trying to get back with fresh water in the dark as the tide came in. They couldn’t see anything, tripping and falling, and struggled to swim with the camera.

The Island really is a brutal survival experience, and the preview suggested that it’s only going to get worse, as it a helicopter coming in to evacuate someone. Text on screen said, “one mistake becomes a rescue mission.”

I was lukewarm about the series after episode one, but even if you didn’t see that, I’d suggest giving this episode a watch.