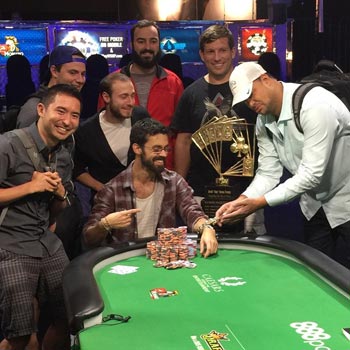 Jean-Robert Bellande, a Survivor China contestant who was the eighth person voted out and a member of the jury, won $784,828 at the World Series of Poker’s Players Championship on Friday, coming in second. That’s significantly better than Survivor‘s second-place prize of $100,000.

Jean-Robert lost at the final table to Mike Gorodinsky, who won $1.27 million. He posted this photo to Instagram with a caption saying, “Thou shall not covet. Soooo close. Devastated but satisfied with my effort. Thanks so much for all the well-wishing.”

On Twitter, Jean-Robert’s bio says his followers can “Track my crazy swings as I take my bankroll from zero to a million.”