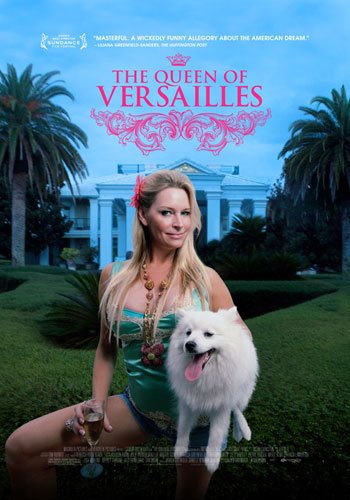 David and Jackie Siegel’s daughter Victoria, 18, died Saturday. The Orlando Sentinel reports that she “was found unresponsive by deputy sheriffs at the Siegels’ ‘Seagull Island’ mansion on Green Island Cove just after 2 p.m. Saturday,” and that the cause of death is being investigated.

Victoria had a central role in the documentary film The Queen of Versailles, confronting her father during its climax (watch here; it starts about at the 1 hour, 25 minute mark). Referring to her father, who’s in his home office and complaining about the family’s use of electricity, she asks her mother, Jackie, “Why do you never stick up to him? Can you not lecture me right now?” The film then cuts to an interview where Victoria says:

“I tell my mom that a lot, that she needs to stick up to him. She thinks that that would just cause a bigger problem, but I think that could, like, resolve the problem, ’cause I think that sometimes my dad just needs to be told, like, I don’t know, he’s not the only one who matters in the house.”

Sunday, Jackie Siegel wrote on Facebook that “It is with great sadness that we ask you to respect our privacy during this tragic time and the loss of our beloved daughter, Victoria. Thank you all for your prayers and for your support.”

Orlando’s CBS affiliate, WKMG, initially reported that she died of a drug overdose, but has since modified its story to say that her death is being “investigated” and ” investigators are working with the Medical Examiner to determine cause and manner of death.” The story’s URL still reveals its original angle, though: “dead-of-drug-overdose.”

As to Victoria’s role in the terrific film, its director, Lauren Greenfield, said in a 2012 interview that “Victoria and Jonquil had a character development that made me want to include more of them. They both had kind of amazing arcs, which really spoke to David’s story. … Victoria kind of made herself more important by what happens in the end because in the beginning she’s this prepubescent, awkward, shy, slightly overweight girl and by the end she’s this beautiful young woman who is somehow self-realized and is the only one who stands up to her dad, and kind of says to her mom, ‘why aren’t you standing up to him?'”

Update, June 8: A statement from the Siegel family’s attorney that was posted to Facebook and reported on by the Orlando Sentinel revealed that Victoria was struggling with addiction. The statement said, in part:

“Victoria was a beautiful spirit with a wonderful smile who was greatly loved, and will be deeply missed. Victoria had a history of seizures and was prescribed medication for this condition. Unfortunately she became dependent and struggled with this condition. She voluntarily underwent rehabilitation and was working hard to address this problem.

… While an autopsy has been performed the cause of death has not been determined. It is likely that Victoria ingested one or more drugs prior to her death, however, we cannot determine at this time whether or not the drugs she took were in fact prescribed medication, something else, or where and how these drugs may have been obtained. We will have these answers as the investigation continues and the toxicology report is released. The family is deeply appreciative of the outpouring of support that they have received and request that their privacy be respected while they mourn their loss.”