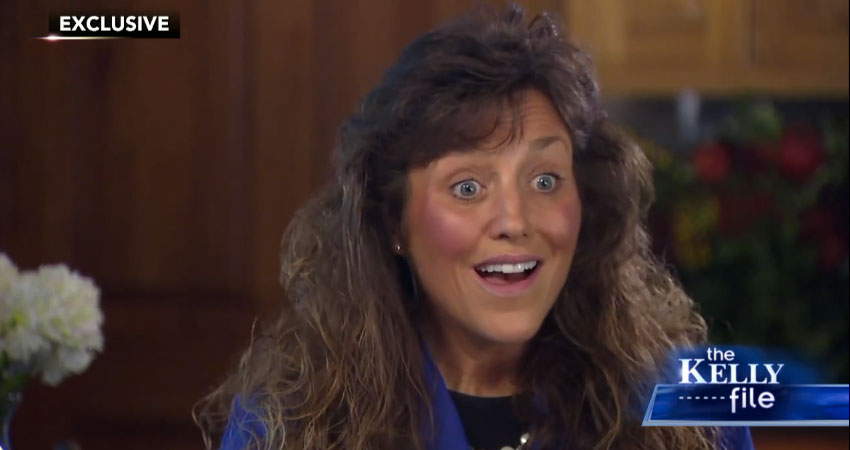 Michelle Duggar said on Fox News that her daughters have suffered more from media attention than from being molested by her son.

The way TLC’s stars Jim Bob and Michelle Duggar behaved years ago, as detailed in a police report, is appalling. The way they justified that behavior last night on Fox News was absolutely revolting and unforgivable. Whatever you think of Jim Bob and Michelle Duggar’s procreation, religiosity, or ideology didn’t even matter, because it came down to one thing: They actually think their molested daughters are being hurt more now more than when they were molested.

It is absolutely time for their television show to be cancelled, and TLC’s failure to act by cancelling 19 Kids and Counting is abhorrent behavior on the part of a television network.

The Duggars’ television appearance last night is notable for many reasons. To start, they didn’t really challenge any facts; mostly, it seemed to me, they confirmed the police reports’ version of events (that’s plural, because InTouch has just reported on a second report from a different law enforcement agency). But the Duggars did try to play those down, to soften them–to brush off what one of their children did to the others, even after saying how horrified they were when they learned about it.

First they minimized Josh’s behavior. They repeatedly found ways to remind viewers that it was just over-the-clothes touching, and if it was under-the-clothes, it “was, like, a few seconds,” as Jim Bob said, as if that somehow makes it better.

Later, Jim Bob even praised Josh for coming forward and telling them. If he hadn’t, they never would have known! Why, Josh is a hero! If you think I’m exaggerating, here’s what Jim Bob said: “The ray of hope was that Josh had came and told us, and his heart was still soft, because we wouldn’t have known about any of these things if he hadn’t came and told us.”

Then, the Duggars claimed they did everything they possibly could. Jim Bob, not a lawyer, defined pedophilia as a way to support Michelle’s previous comments calling transgender people “males with past child predator convictions.”

The Duggars point fingers and blame others

With a big assist from Fox News’ Megyn Kelly, they ultimately started blaming the messenger, which is always a terrific strategy for the completely innocent to adopt. They said they’re considering legal action against the police chief, who released the police report in response to a Freedom of Information Act request (i.e. she complied with the law).

Then came the absolutely incomprehensible: First Jim Bob said that the family now wants to work hard to protect police records. “We want to be advocate for protecting juvenile records,” he said. Not victims of molestation or families who struggle with similar situations. Not advocate for his own daughters or the other victim of his son’s molestation.

Then Michelle dropped the most insane line of the entire interview. Referring to her daughters, she said, and this is an exact quotation:

“They’ve been victimized more by what happened in what has happened in these last couple weeks than they were 12 years ago.”

This is a family that chose to become television stars, exposing themselves to the world, and they are now dismissing their own failure to parent and protect their own children. Instead, they’ve decided to point fingers. Michelle even claimed people with an agenda are slandering them.

There is something deeply, deeply wrong here, starting with the way the Duggars are now using their daughters–victims of childhood molestation by one of their siblings–as a weapon against criticism of their behavior.

Two of those daughters will be on Fox News Friday, and based on a clip, will make the same argument. These are the daughters who, Jim Bob actually said, were only touched for “like, a few seconds” and what happened to them “was not rape or anything like that.” Also, Jim Bob and Michelle repeatedly said that, at least for the first molestation, they were asleep and didn’t know what happened, as if that somehow makes it better.

If you were the victim of molestation and your father said that on national television–that you didn’t really know what happened and besides it was quick and just on top of your clothes–never mind that you’ve been raised in a home where women are deferential to men, how could you respond in any other way?

Time for TLC to act

On Twitter, the response to the Duggars was of shock, horror, and outrage. The flood of responses to my tweeting these quotations was universally negative. Of course, this isn’t a scientific survey of responses, and I’m curious how true Duggar fans responded.

After all, I’m not the target audience for their excuses. Will the Duggars’ fans be convinced by this performance? Will TLC, their benefactor?

TLC has not yet cancelled the show. It has not even said anything to condemn any of this behavior. As CNN’s Brian Stelter said, there has been “no comment from TLC” because its “strategy of silence continues.” (Stelter also reported, by the way, that the Duggars hired a public relations expert who also happens to be “a longtime adviser to [presidential candidate and family friend Mike] Huckabee.”)

Group president Marjorie Kaplan–who oversees Animal Planet, Velocity, and TLC, and who I like very much–needs to act decisively. This is beyond salvageable, and the network cannot continue to partner with and profit from two people who have behaved so horribly. Doing so is to say: Okay, we’ll protect our stars, whatever they do, as long as they bring us the ratings and cash!

Weeks ago, Time’s James Poniewozik made the argument that the show “is, simply, a moral fraud” because “the family kept the whole truth from us and set themselves up as paragons of childrearing and decency is morally dishonest.”

It has now become morally reprehensible and ethically irresponsible to continue to distribute and profit from the show. This is a family led by two people who clearly demonstrated that their priority is their own self-preservation. TLC does not need to help them with that. But TLC may care more about the estimated $25 million in ad revenue they generated this year.

Quite simply: After last night, there is nothing that can be said or done to justify continuing to be business partners with Jim Bob and Michelle Duggar, people who say publicly that the shame of their daughters’ molestation by their son is worse than the actual act.