Big Brother winner Dan Gheesling has a lot to teach you

Dan Gheesling won Big Brother 10 with the first-ever unanimous vote, and he came in second on Big Brother 14. And now he can help you do what he did: go from normal person to high-profile reality show cast member.

I recently spent time talking with Dan about his web site and business, How to Get On Reality TV, and found that he has a lot of great advice to offer. But I also learned that why he does this is not just about capitalizing on his fame.

Before Dan started his reality TV casting advice project, he “was kind of obsessed with building an online business,” he told me. Though he enjoyed talking about the show online, he wanted to do something else to connect with fans.

Ultimately, it came down to trying “to help people who are similar to me–just a normal guy, not a recruit.” There are, he said, “a lot of people on the fringe, quote-unquote normal people,” and they may need the most help “because they’re not familiar with being on camera and how to tell their story.”

There’s also, Dan said, “a selfish reason: I prefer to watch people [on reality TV] that tend to be more normal.” 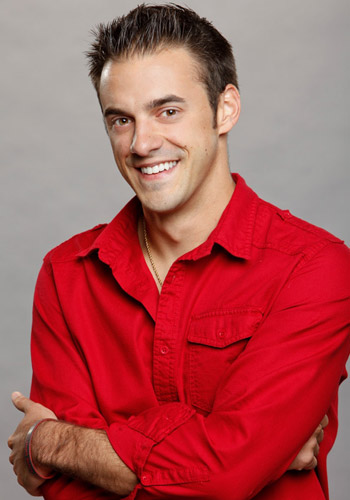 Dan currently has an offline job that he doesn’t talk about publicly, and also still coaches football. He speaks at colleges and universities in the U.S. and Canada about leadership and his experiences, and also works on a “handful of businesses that keep me busy,” he told me.

The genesis of this business came through his own experience. “I used to scour the forums, mid-200s, and I found this one post that really just described the entire casting process for Survivor. But that was the only thing I could find. When I applied for Survivor, I wasn’t completely in the dark,” Dan told me. After making the semi-finals for both Survivor and then Big Brother, he realized “it was the exact same process.” He also learned from his mistakes: “there was no way the first time I went through casting I would have been cast; I didn’t know what I was doing.”

That’s because, Dan says, being cast for a major network reality show is “not a normal thing and it’s not a thing people are inherently good at.” It takes practice, and his course and book are designed “to shorten, hopefully, for some people, the lead time to get themselves in a position to be cast.” Although his advice may be best for those trying out for big network shows, Dan say she hears from others–including someone cast for Syfy’s Opposite Worlds–that his advice helped them, too.

Dan refers to this as “a fun side project” and says “it’s been a fun ride. It’s definitely not my core business of what I do, but I get excited when I see a normal person.” He now spends about 30 minutes a week on it, creating a weekly video podcast episode in which he answers questions. (The online course is self-led, so he doesn’t have to be actively involved in it every minute.)

Dan surprised me when he said some people actually criticize him for giving advice to others. In part that’s because people think it’s as simple as the old mantra: “to get on the show you just have to be yourself.” I admit that I’ve long thought that to be true, but Dan disagrees with that advice: “If you’re someone like an Evel Dick, you can do that. But that’s such a rare case … to have that dynamic personality where they don’t need direction.” Dan points out a critical fact: “I was anything but myself in casting.”

Now, years later, Dan is friends with Big Brother casting director Robyn Kass, and he said, “we just don’t talk about it” because “it makes her job harder” when people come in with an “airtight casting story when they normally wouldn’t have” if they hadn’t taken his advice via the book and course.

Because of the niche he’s carved out for himself here, people reach out to Dan all the time–including in the middle of being cast. “I’ll get a lot of e-mails from people who are in the finals process,” he said. While Dan offers to consult on and critique casting videos, if someone is in the middle of the process and reaches out, he’s frequently offered advice for free. “I’m just looking to help someone. At some point I do it, I don’t want to say for kicks and giggles–[but] why wouldn’t I help them? At one point I was in their shoes, and I had to figure it out myself.”

One person who reached out was Jon Misch; he didn’t make it on The Amazing Race with Jaclyn Schultz. “He had a tough time in the finals,” Dan said. After talking to Dan, they were, of course, cast on Survivor San Juan Del Sur.

Dan told me, “I’ve been very fortunate in terms of the opportunities reality TV has given me” and this is “a way for me to give to the community that’s been so good to me.” He said he’s glad to help “people who have pushed themselves” hard enough to get to where they are. In addition, his help can have a positive side-effect: “If they’re thinking about this at a late stage in the game, they’re probably going to make a compelling character on the show.”

After watching the online course and reading the book, which offer a lot of detailed, step-by-step advice along with the rationale, I told Dan that it seemed he’s teaching people how to play the game strategically long before the real game begins.

“Without a doubt,” he said. “There’s an element of casting that is a game. If you know information that the other people don’t, that’s going to give you an advantage.” Since people are often competing for a spot on a show against a person with similar characteristics, “if you’re the only one with additional information, that could make the difference.”

As an example, Dan talked about the way producers and others are “going to try to break” potential contestants by suddenly trying to provoke them. Knowing that’s coming is a huge advantage. “There’s no lead up to the provocations; they just do it every single time because they want to see how you handle adversity.”

It took Dan eight to 12 months to write his story and guidebook (How To Get On Reality TV: How A Normal Guy Got Cast On Reality TV), and approached it using his experience as a teacher. “I learned how to break down information” and provide action steps, he told me. 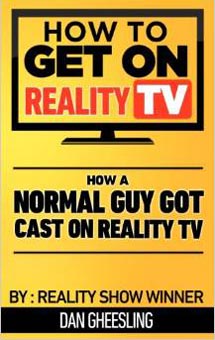 Despite that experience, the process was still brutal. “That’s one of the most awful things you can do to yourself is write a book. It’s not exactly a fun process, but when you’re done with it, how many people is this going be able to reach?”

The products he’s created offer different levels of engagement. “Each one is a little more in depth,” Dan said. The bootcamp course is more than five hours of video advice from Dan, plus worksheets and specific tasks that help guide one’s process.

All of them make something very clear: applying to a reality show takes work.

“For the vast majority people, you can’t go into a video and wing it,” Dan said. “You don’t have to script it, but you have to have an idea about what makes you unique. What is the chyron under your name going to say?”

A return to Big Brother for Dan Gheesling? No.

Dan acknowledged that casting producers take a lot of heat and also have “a really tough job,” because how the cast will perform–how they’ll interact with others and respond to the game–is ultimately unpredictable. Sometimes, he said, “duds turn out to be some of the most revered personalities,” while other times you can have “the superfan who freaks out.”

Dan told me that he watches every season, though sometimes skips what he calls “the entertainment episodes.” He also doesn’t regularly watch the live feeds, though follows those who do. “It has to be a really really compelling cast for me to watch the live feeds, and I can’t think of the last time I’ve done that,” he said. He sticks to the CBS show: “I just like to sit back and appreciate the production aspect. The producers, they do a great job” within the constraints they have, he said.

Dan and I talked before the Big Brother 17 cast and twist of weekly twists were revealed, but it was clear that wouldn’t have been his choice. “I would love to see no twists,” Dan told me.

“I know that’s not exciting, it’s not sexy, you’re not going to be able to promote it. When you have so many twists in a show it makes it a lot more difficult for someone to truly control the game,” he said. “That’s why I watch the show. I grew up watching Will Kirby essentially control a majority of the game because there weren’t these crazy twists. I get it, it makes it interesting. I would love to see a vanilla game, maybe every couple years.”

Ideally, he’d love to see another all-star season, too. “There’s enough people now that you can make an interesting season. Just being in a house with other players that have played the game makes you play harder,” he said. “I just don’t know what twists they can throw in that would make it more compelling to watch than a vanilla season or an all-star season. … A majority of the time a twist will–I don’t want say ruin the game–adversely affect the game for the most strategic players.”

Would Dan return for such an all-star season, or at all? “It’s pretty easy for me to see that I would never play again,” he told me. “The second I stepped off the first season I wanted to play again; there’s a natural desire to want to play again.” Now, that’s not there. “I’m satisfied with the game I left out on the field. I’m very happy with how I played it.”

In case there’s any doubt, he continued: “I have no desire to go back and play, there’s no draw for me. I couldn’t see it happening. I can’t imagine ever a situation I would go back.” He adds that it’s “such a sacrifice from a family standpoint” to be away so long. And now it’s time for the “third wave of players” to return and play again, he said.

Whoever is cast—and probably many of those people will learn how to play the casting game from Dan—the one-time winner and one-time runner-up is confident that Big Brother will be there for them. “I just don’t see a show like Big Brother going off the air,” he said. “I just think it’s going to be around for a long time.”