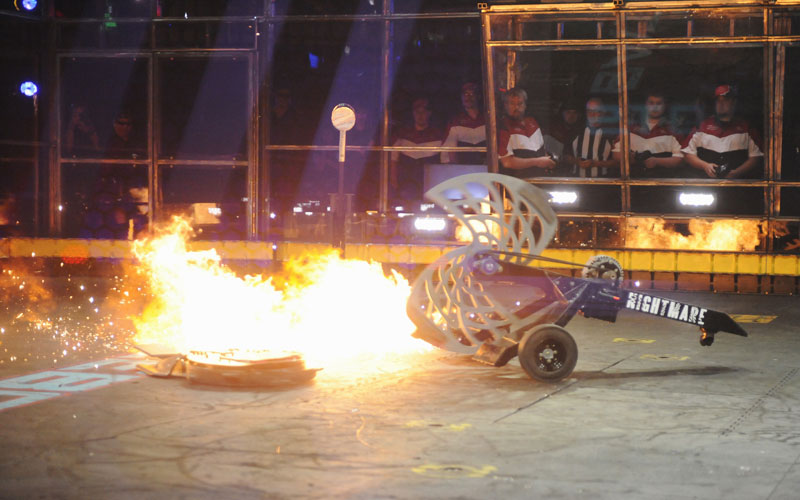 Nightmare versus Warrior Clan on ABC's revival of BattleBots. (Photo by David Moir/ABC)

It took nine minutes for the metal to start flying on ABC’s revival of BattleBots, but once it did, it was as awesome as I remember.

In a battle that appeared terribly mismatched, a brightly painted lawnmower blade against what seemed like a more sophisticated robot, the destruction started immediately, as the lawnmower, IceWave, tore through the other robot, Razorback.

Later, during the last battle, a tiny bot that was part of its parent bot, Warrior Clan, sat underneath Nightmare, a bot with a huge spinning blade, and erupted in flames. That’s when Nightmare’s giant blade smashed the tiny bot, sending fiery pieces all over the arena.

I don’t recall exactly when I stopped watching the Comedy Central series, but I do remember watching the show a lot in the early 2000s.

Though it didn’t go off the air that long ago—just 10 years—there’s something about the show that feels like it’s from my childhood, or at least pre-Survivor.

Regardless, if we can’t have another season of The Quest, Whodunnit, or The Glass House, it was a genius move on ABC’s part to tap into nostalgia instead.

Besides connecting with our memories of the spectacle, the new version brought back competitors and bots who’d appeared on the earlier version. My terrible memory and I actually didn’t remember anyone, but that didn’t really matter.

That’s because this new series also feeds our appetite for summer shows that you can just dip into yet have a lot of big moments in each episode.

NBC figured that out a while ago with American Ninja Warrior which, yes, builds over its season, but you can tune in any time and enjoy what’s happening in the moment without having to catch up.

The pleasures of BattleBots

There’s something fascinating and awesome about watching robots with different strengths and weaknesses smash into each other.

It’s survival of the fittest and most well-constructed. Also, watching objects get violently destroyed is ridiculously entertaining.

Like the show that preceded it, Celebrity Family Feud, the network smartly left the original components in place.

The game show was simply the daytime version but with celebrities and their families (and Curtis Stone and his family); BattleBots was mostly the old show, just bigger. The only upgrade I really wanted from this version was more slow motion–high speed cameras, please.

Chris Rose and Kenny Florian’s color commentary works okay, though their other segments–sometimes with host Molly McGrath–are the weakest part of the show. For some reason, Rose and Florian mostly looked past each other, perhaps looking at off-camera cue cards or teleprompters. But it made a distracting segment more annoying.

Luckily, once the show got into the fights, it just kept charging ahead, briefly introducing the bots and then letting them smash each other. That’s what a show named BattleBots needs to deliver, and ABC delivered.