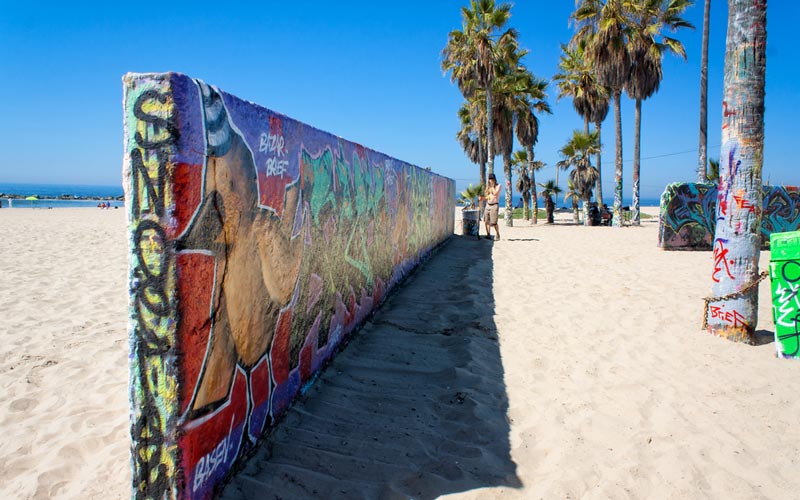 The Venice Art Walls, site of the 2015 start of The Amazing Race 27. (Photo by Ken Wolter / Shutterstock)

The Amazing Race will have its second public start Monday morning, as the 27th season begins in southern California. The new season will begin at 8 a.m. ET at the Venice Beach graffiti art wall, when the teams take off–probably for LAX–and when The Amazing Race 27 spoilers begin.

The show invited fans to show up:

The next #AmazingRace adventure begins Monday in CA! Join us at the Venice Boardwalk Graffiti Wall to send off the teams starting @ 8am PT.

The show had its first public start during season 25, which started in Times Square. CBS also revealed the list of cast members at that time, which then included Survivor South Pacific‘s Whitney Duncan and Keith Tollefson.

Even if the network doesn’t release the team names, it is, obviously, happening in public, so we’ll know the teams midday tomorrow eastern time. If you’re not in the L.A. area, you can possibly watch via this webcam.

Update: After all the filming necessary to create the start of the race–fake starts, cameras panning–Phil Keoghan finally stated the race shortly after 9 a.m. PT. The teams first had to do a water bike race in Marina Del Rey, and the winning team won the right to be on the first flight alone. They’re all headed to Rio.

The teams appear to be all new teams, and I haven’t seen many positive IDs yet, other than TMZ television personalities Shevonne and Kelly.