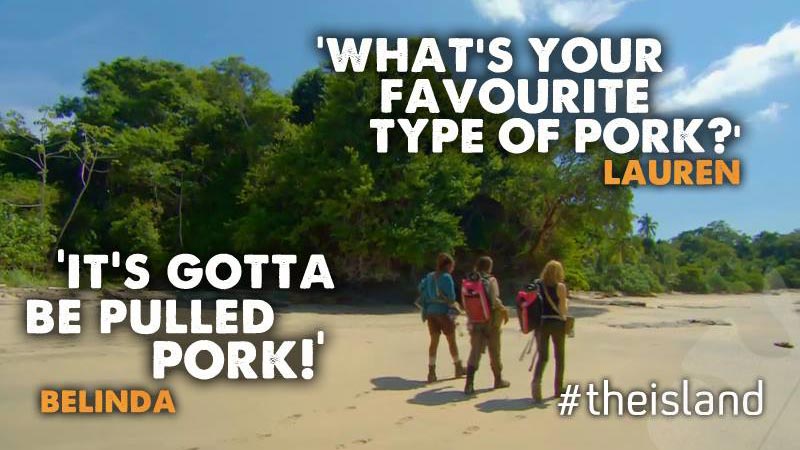 A promotional image from Channel 4's Facebook page for The Island, on which contestants killed pigs that were placed on the island.

The Island with Bear Grylls is currently airing its second season on Channel 4 in the U.K., and the show will make its way to NBC this summer. It’s basically Naked and Afraid without the nudity and with a lot more people. (In the case of NBC’s version, which debuts later this month, it will be all men.)

Channel 4’s second season has two islands, one with men and one with women, and some of them have killed pigs to eat. (They also killed an endangered crocodile by accident, thinking it was a caiman.)

That has resulted in protests from animal rights activists.  As a vegetarian and a person who buys cruelty-free toothpaste with the bunny logo that ensures no animals suffered so I could have clean teeth, I find this protest to be ridiculous. If anything, having to kill one’s one food by hand might persuade more people to be vegetarians and stop all the bacon consumption. But I digress.

What’s most fascinating about this to me is that the pigs that were killed were placed on the islands by producers–and, even more significantly, that the production readily admits this and other “modifications to the island” on the show’s web site.

Yes, animals were added to the islands to possibly be killed by the contestants.

You may recall that Survivor was accused of doing this during its second season, when Mike Skupin killed a pig. The Island happens to have been filmed in the Pearl Islands off of Panama, where three seasons of Survivor were also produced.

The show also admits that it added a fresh water source to one of the islands, which is something Survivor has been doing for a while now–sometimes its wells are disguised to look like they’re part of the environment, while this season it’s just a freestanding water tower.

Here’s how Channel 4’s web site details how it staged the islands. I’m mostly impressed by the transparency here, even if the admission does make the show and the contestants’ struggle feel somewhat less real.

Modifications to the Island
In order to keep the men and women safe Bear ensured that there was enough water, indigenous animals and vegetation for survival as long as the men and women had the ingenuity to catch, kill or utilise the natural resources to last the course of the experience.

Modificatons included introducing pigs, iguana, caiman, coconuts and yucca to the islands, all are indigenous to the area.

Water
To ensure that the women could survive, a muddy water pool was dug out and lined to provide a stable fresh-water source. The men’s island had several large natural water sources. To avoid dehydration, the men and women would each have to find, fetch and purify the water – over 50 litres a day in total!

Caiman
While caiman are indigenous to the area, to supplement the existing population and ensure the survival of the islanders, additional animals were introduced to the islands’ mangroves.

Pigs
In order to ensure that the men and women have the resources they need to survive, additional native black pigs were placed on the islands.

Iguana
Iguana are indigenous to the area and some were added to the islands to support the survival of the men and women as a potentially vital source of protein.