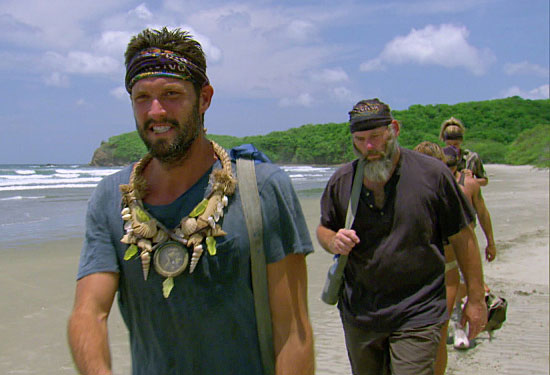 The remaining Survivor Worlds Apart cast on their way to a terrific Tribal Council. (Screen capture by CBS)

Two dramatic challenges, one thrilling Tribal Council. That’s what Survivor Worlds Apart delivered last night, along with two solid challenges. And just wait until you see what happened when Dan got to Ponderosa.

We had an unexpected episode of The Jeff Probst Show before the reward challenge, this time to focus on Rodney’s birthday boo-hoo boo-boo. Probst as producer squeezed every last bit of drama juice out of the Rodney watermelon, and set Rodney up for even more unwarranted disappointment.

Ultimately, Rodney’s team lost, and once again, he expected someone to give him their reward. Carolyn didn’t, and I cheered. Enough with the entitlement, enough with the bartering and trading. Tangent: Also enough of Rodney and Will sitting in those same camp chairs with the same sour expressions on their faces.

It took both tribes more than an hour to solve a word puzzle that said simply, “A reward with all the fixins.” Carolyn’s team’s win came only because she listened to Probst’s clues while Sierra refused to listen. Usually, that’s the right strategy, but not here. By the way, I really appreciated Probst’s self-awareness as he gave clues, joking that he keeps saying the same things over and over again.

Before the puzzle was a nice obstacle course, which–along with all the shots of Nicaragua–looked really spectacular, as it did from the helicopter as the winners went to their reward. This season, for all its ugliness, makes Nicaragua look more attractive than it did last season.

I’m still not on board with Mike as a superhero except by contrast to the rest of the tribe. But his win at the immunity challenge meant the alliance would have to turn on itself, and that’s something I absolutely wanted. Mike was ahead in the challenge by a good bit, but Sierra caught up fast, and based on the editing, at least, it came down to a crazy-tense last few seconds. Those ball mazes with their handle-and-string controls aren’t easy to operate–witness Dan’s wooden maze flopping all over as he declared, “I suck at life.” Mike’s ball flirted with the final hole repeatedly as Sierra’s got closer and closer, but it finally dropped in.

Mike’s safety led to some interesting scrambling. Through all of this, Mike and Carolyn figured out that the alliance was going to target Carolyn, not Dan, even though Dan had his extra vote advantage. At one point, Mike approached Dan to tell him that the others were going to vote him out, and while Dan didn’t seem to buy it, he got paranoid enough.

That led to the spectacular one-two punch of Dan playing his extra vote and Carolyn producing and playing her secret idol. That nullified all votes for her, including Dan’s extra vote. (That vote had special parchment that was marked, so it wasn’t a secret.) I did find myself wondering what would have happened if Dan would have anticipated a potential idol and thus voted for someone else twice; that would have at least forced a tie between him and whoever he voted for.

But Dan had his torch snuffed and left insisting that he has “no regrets.” His exit is at least one positive note as we go into next Wednesday’s finale. Alas, Will and Rodney are still there, earning more and more as they stay later and later.

From the very start of Dan’s Ponderosa video, it’s pure comedy mined from the caves of delusion. “I didn’t win, but I feel like I was a hero the whole way through,” he tells the camera. His confidence throughout reveals he has no idea how his horrible actions will be received.

It gets better. Watch a medic, for example, politely declining to tell him how amazing he looks. Hali refusing to hug him. Denying that he was stubborn but insisting “your first instinct was the right one.” His amazing answer to a producer asking, “What did you learn about yourself out there?” Insisting he’s self-aware. And most incredibly, Realizing that his real mistake was not being worse: “I guess I should have been more of a jerk.”

Watch, enjoy, and re-watch all day: