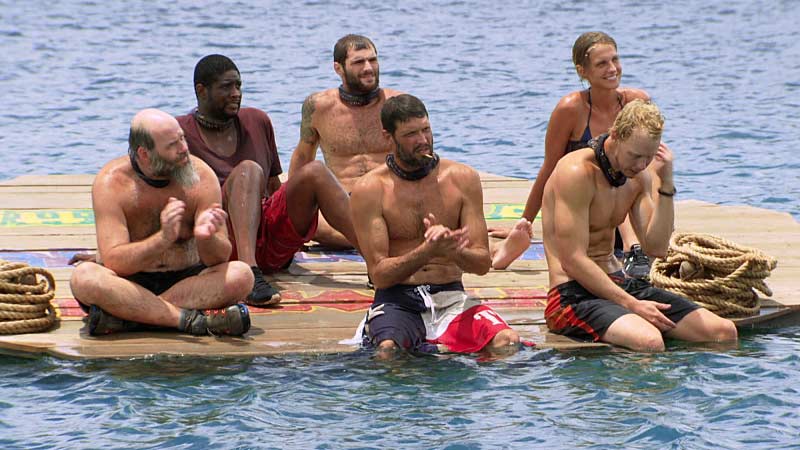 This image of sad people sitting on a sinking, wet raft seems to be a good metaphor for Survivor Worlds Apart. (Screen capture by CBS)

You know a season of Survivor is in trouble when the most noteworthy, sustained thing is someone whining about not being given a reward because it’s their birthday.

Yet that’s what filled up a significant part of Survivor Worlds Apart: Rodney’s bizarre entitlement and whining about “a bunch of scumbags who neglected me on my birthday.” He was upset because after the team-based reward challenge, none of the members of the winning team gave up their reward.

As he said repeatedly, he has received “not one reward.” I gave this some serious thought and then realized reason for that probably has something to do with the fact that he has not yet won a reward challenge. Why he thinks he deserves one is a mystery.

The actual reward winners–Mike, Sierra, and Carolyn–took supplies to a local Nicaraguan orphanage, a life-changing experience that allowed them to stuff their faces and talk about the game while the children sat there as the equivalent of background extras. Whether it was the editing or the experience, this wasn’t Ethan in Africa.

That group won after yet another challenge during which Mike decided to play the challenge by himself. It was a dramatic finish because Dan showed remarkable skill and nearly came from behind to win as Mike stubbornly refused to let anyone else try.

The problem with Mike’s game

With a lack of other options, a lot of viewers appear to be hoping for a Mike win at this point, but he’s playing a visibly selfish game–not quite Russell Hantz, but thematically similar. It’s one thing to play a strong individual game, but that still involves maintaining relationships. This episode, when he knew he’d play his idol, was the chance to reach out and maybe try for something new, but instead he seemed to be content to let the others eat one of their own, even though they’ll just turn on him next week.

Ultimately, the vote was an easy one. Flushing both the idol and the advantage by voting for Dan and Mike would have been ideal. But challenge-winning, likeable Tyler is by far a greater threat, so much so that Carolyn turned against him.

How fascinating that so much of the “strategy” this season has come down to making the easy, obvious, unsurprising choice. (Rodney’s transparent “plan” to convince Mike to not play his idol doesn’t really count as strategy for me, just comedy.) We’re back to the editing misleading us and/or concealing what will happen because–with some exceptions–so little of it is truly surprising. As Jeff Probst pointed out in his final words, “everybody wants to take the weakest to the end,” so that’s what we’re left with.

Best season ever, though.

On to the Survivor Second Chance vote.