Survivor‘s 32nd season is returning to the brain/beauty/brawn format, and its cast includes another former Big Brother cast member (Hayden was the first) and a former NBA player.

The 32nd season already filmed from March through May, though it will air next February, the first time the show has filmed and broadcast seasons out of order. Martin Holmes, the spoiler previously known as Redmond, has collected the names of 10 cast members uncovered by Survivor Sucks posters. 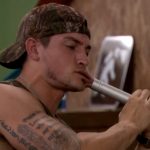 Big Brother 16’s Caleb finally gets some action in the house.

The Big Brother cast member is Caleb Reynolds, who you may remember from his “creepy,” “stalkerish” obsession with Amber (and those are executive producer Alison Grodner’s words); the awful things he did and said online pre-season; or from when he got a vacuum stuck to his face.

Also on the cast: