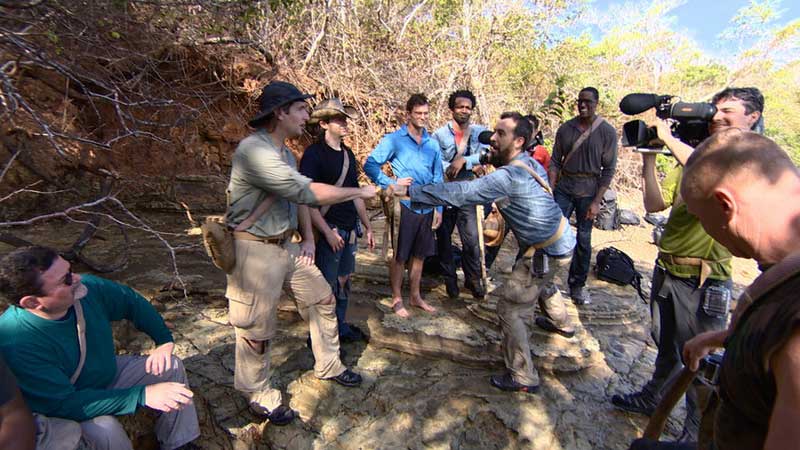 The cast of The Island after being stranded without even a full camera crew. (Photo by NBC)

NBC continued its obsession with Bear Grylls by debuting his latest series last night: The Island. The show has aired two seasons in the UK, and doesn’t exactly break new ground. Actually, the first episode was very reminiscent of two better series:

So far, my major objection is that we’re trapped with this group for six episodes. Coming off Survivor Worlds Apart, the cast–all men–felt way too much like Survivor’s blue collar tribe dude clique, and that is not a compliment.

Bear Grylls disappeared after dropping the cast off on the island, and he’ll return at the end, though in the meantime he leans against foliage to narrate what’s happening. If you love watching him, there’s not enough of him here; if you’re annoyed by him, he’s still there, and unnecessarily.

I’m also not sure why they’re filming themselves. Embedding four camera operators seems only to have produced shaky coverage of some of the action. When Taylor became physically aggressive with someone, the cameras missed it. Why not just use a small crew that doesn’t interfere like Naked and Afraid does?

That said, The Island isn’t exactly bad television. I just don’t feel all that engaged or care all that much about watching this group of guys struggle with survival and their masculinity. There were flashes of potential. When Dakota, a 21-year-old bird farmer who’s never seen the ocean, jumps in it for the first time (well, second, but who’s counting), he’s in awe, truly. He talks about how the water tastes, surprised by its saltiness, and there’s something real and unexpected there. More of that, less bickering, please.