For a series with a sensational title, Naked and Afraid continues to deliver authentic and highly entertaining episodes each week. That’s the result of a simple format that works, and also a product of the work done by the small on-location production team.

I talked to executive producers Steve Rankin and supervising producer Mathilde Bittner about how the on-location production works. Our conversation took place last August, when Mathilde flew to L.A. from Florida, where they were in the middle of filming the “Alligator Alley” episode set in the Everglades that just opened the new season. While Rankin wasn’t on location for that episode, you may recall that he was bitten by a snake and a horrifying picture of his damaged foot was tweeted by Bear Grylls.

Naked and Afraid’s crew that follows the survivalists

The series has a very small crew on location: a director of photography, a camera assistant, an audio person, and a producer. There are local PAs, one daytime and one nightime, in addition to a day and night medic, but they stay away from the filming unless they’re needed.

The crew leaves the camp before it gets dark, Bittner told me. “We need to be safe, too, and sometimes we need to get out of there before nightfall because it’s treacherous for us,” she said. “They’re on their own.”

Rankin said that the cast members have “an emergency radio transmitter/walkie-talkie,” and also a whistle to call for help if they need it.

How they find locations

Production selects locations that are in the United States and around the world. So what does the ideal location need? Rankin identified the criteria:

Rankin said “anywhere in the globe that has those things, we will consider.”

Changes from season one

“We’ve tried to allow the cast more freedom,” Rankin said, referring to the second season. “We’ve encouraged them to use their diary cams more and more, giving them more time unsupervised. We’ve also installed an infrared capable fixed-rig camera in the shelters for the second season, which allows more time from the survivalists so they do feel more alone and we don’t miss stuff, either.”

Those diary cameras, Bittner said, means that the footage is “more authentic, it’s truly like a diary where they can share and open up and be more vulnerable than when I’m asking them a question and there’s the camera and sound and everybody there.” However, she said, “it really fluctuates between the cast members” in terms of who’s willing to open up.

Rankin said, “I’m happy to have the imperfect coverage as long as it’s still there, as long as we can tell the story. Having those things really makes that show incredibly powerful because you know there isn’t a producer behind the camera.”

“Allowing the survivalists the free reign, the ability to stay in the environment emotionally as well as physically, is key to this,” Rankin told me. “The less we interact with the survivalists, the better. We always try to have minimal interaction.”

One of the times when the production backs away the most is when the survivalists are hunting, Bittner said. “We’ll try to stay behind and get some wide shots and get a sense of where they are in the environment, but then let them go into certain areas on their own so they can actually be successful,” she said. Producers sometimes strap GoPro cameras to the survivalists first to try to get some coverage of what may happen, “but it doesn’t mean the footage is going to be that great,” she said.

When they’re with the participants, producers try to keep interaction to a minimum. “They’re in a bubble,” Rankin said. “The more we interact, the more we enter the bubble, and we burst it.” So, he said, “If we have any issues with our production process, then we always withdraw and then we discuss it away form the cast, and then we go back.”

How production helps the participants

Beyond getting help in an emergency, producers don’t give the cast assistance. There are two minor exceptions, however. First is the day-one meeting between the two participants. “That has to be choreographed because we’re shooting two people walking to a spot,” Rankin said, adding that it takes about two hours. “That’s as much as we do. The rest of the time, they just have to figure out how to do it themselves.”

The second exception is when the participants are heading to the extraction point. Rankin said that while “they have a map, a very basic sketch map,” “if they go off track during that walk, they might just have a little nudge from the producers.”

That said, the participants–despite being naked and exhausted–often find the extraction point much more rapidly than the production expects them to. 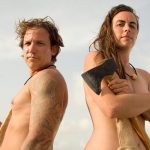 Naked and Afraid is getting a spin-off series

Bittner told me that frequently, “they’ll actually be much more efficient than we were on our scout” of the journey to the extraction point. “They’re actually looking at the environment where we sometimes tend to be a little too close to our machines.” Perhaps because of their adrenaline, their sense of accomplishment, and/or their excitement to get out of the environment, “they surprise us how fast they move,” she said.

And just to be clear: Bittner said that “we don’t give them sandwiches at the end of the day. They will ask for things–they ask for Snickers bars and cake and spray and whatever–but it’s very much what you see,” which is that they do not have any resources except the ones they can find at the location.

One thing that they do provide is a hint of external motivation. “If you lose your mental strength or your motivation, it’s over,” Bittner said. “A big part part of what I do is to remind them–when they’re having these lows, when they’re like, I don’t want to do this any more–remind them why they’re there. … reminding them why you’re here, and what you signed up for, and you have it in you.”

Both producers agreed that it’s very much a mental game for the survivalists. “Your mind will find excuses to get you out,” Bittner said. Rankin added that “when the pain gets too much then that’s when they start to crack. … When they’ve had enough, and they can’t do any more, and you see them break, it’s tragic, it’s heartbreaking. … Every single one of them regrets it.”

Bittner said that those kinds of reactions “just shows how real the show is that some people are like, I have to go because I don’t want to die. I have kids at home. Even though we would never let that happen, it’s that real, and those thoughts come up.”

Naked and Afraid cast surprise themselves and producers

Rankin told me that producers can never predict what will happen. “We’ve met these people, we’ve vetted them, we’ve been through the whole process of making sure they’re capable of being on the show and making it through the 21 days,” he said. “We build up a picture of who they are, what they’re like, what they’re likely to do, how they’re likely to interact with each other. Every single time, our expectations have never been met. It’s always been different from what we expect. It’s a lesson about how you judge people.”

Bittner said that producers face surprises, too–“you never know what you’re going to step into every day”–but as to the cast, “what surprised me the most about how many of them have these little epiphanies about what matters in life. Most of them, across the board, talk about family and how they have to make more time for that, and how we have more than what we need. We really don’t need that much to be happy.” She added, “There’s a lot of free time to think and just reflect on your life and where you’re going and what matters.”