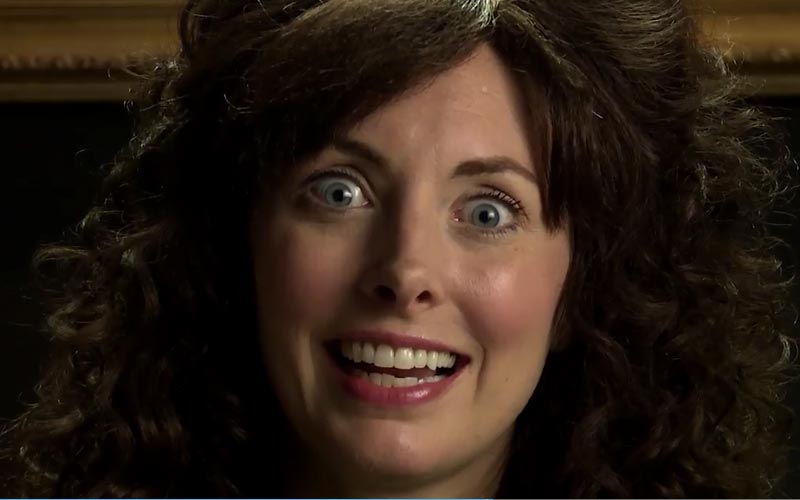 Erin Gibson as Michelle Duggar in Funny or Die's take on the Duggar molestation scandal.

There’s a new Funny or Die video with actors playing Jim Bob and Michelle Duggar who respond to the scandal related to their son’s molestation of his sisters.

Although the impressions of the Duggars are on-point, and though there are some funny lines at the start and finish, the whole video didn’t strike me as funny at all because it’s basically just true. What the actors say is far closer to the reality of this insane story than absurd exaggeration.

Consider this line, spoken by the videos writer/director, Erin Gibson, who also plays Michelle Duggar: “We did the right thing and immediately waited three years before we called the authorities.” Jim Bob, as played by Greg David Jones, says, “And then we sent him to a counselor.” “Michelle” finishes the sentence: “who is our friend–this guy we know, who’s in the remodeling business in Little Rock.”

That is pretty much what happened! The only exaggeration is the three years part.

According to the police report, a year after Jim Bob was told by a young girl that she was fondled in her sleep, and eight months after Josh admitted it, Jim Bob learned of more molestation. Then he went to his church leadership and sent Josh to a program, but Michelle told police in 2006 that was “a family friend who was in the home remodeling business.”

As a result, it highlights how sad and tragic this is. Yes, there are a few witty jokes, but it’s hard to laugh at how a family that did nothing to protect molested children except publicly preach about how others were child molesters.