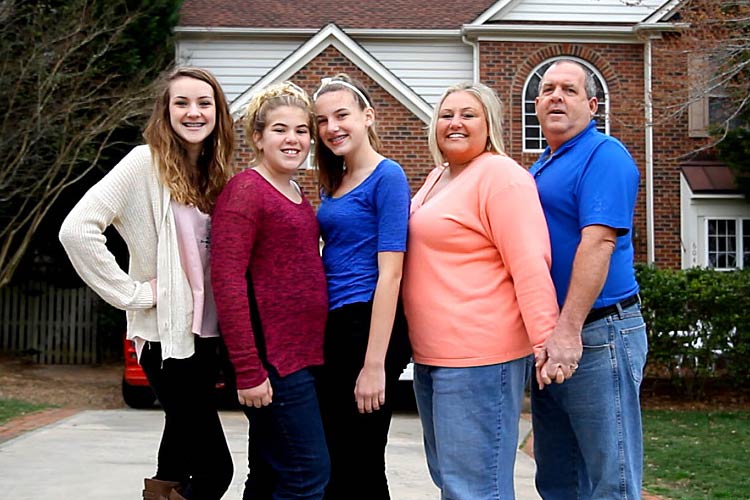 The awkward position producers made the Bergin family stand in for this shot is less awkward than the decision they were forced to make. (Photo by CBS)

Toward the end of the first episode of CBS The Briefcase, which debuts tonight, executive producer Dave Broome is driving a van with two of the cast members inside. They’ve just visited another family’s house and are now weighing whether or not to keep $100,000 for themselves or give some or all of it to the other family.

“Can you pull over?” Kim Bergin asks, already emotional. She climbs out of the vehicle and bends over on the side of the road, which is covered in melting snow. Through her tears and sniffles, we hear her heave and gag.

She’s been brought to physical and emotional pain by the decision she has to make.

By this point in the episode, you’ll know whether or not this is a journey you want to go on. For me, the answer was no. Real life involves tough choices, emotional distress, and physical discomfort. Yet the kind that The Briefcase offers is the worst kind, as it’s entirely manufactured by the show’s producers.

Imagine someone hitting their face on a Survivor challenge. They may be in pain, even cry, and might later laugh about it. Yes, a challenge injury is a product of the environment the producers have created. The Briefcase, however, is the kind of environment where Jeff Probst would take a shovel and hit someone in the face. It crosses a line that is unacceptable.

The series, however, is admirably transparent about what it’s doing. There’s no host, just the executive producers introducing the choice that they’ve created. We sometimes see the camera crews. It’s very clear that this is a reality TV version of The Box, where unwitting people have a terrible choice forced upon them. And I mean forced.

In the second episode, one of those people, Amanda Musolino, says, “I don’t want this decision,” and it’s difficult not to feel for her in that moment. (I’m curious if anyone actually did reject the premise and tell the production to go away.) Later, Amanda tells her husband, “I hate you,” storming off because of their disagreement over the decision they have to make.

That’s what The Briefcase does best: creates artificial conflict.

The Briefcase starts with deception 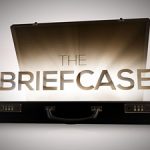 My response to the show might not be surprising, considering I had a viscerally negative response to the trailer and concept. But I watched the first two episodes with as open a mind as possible. Its producer and creator, Dave Broome, has been passionate about responding to criticism by insisting this is a life-changing series. I wanted to see that show. But I also had to judge what was on the screen.

I was wrong to characterize the families as “poor.” They’re middle class–or, as one participant describes his situation, lower-middle class. Some own homes and have mortgages, and others have full-time jobs. Yet they are also clearly in need. Sometimes that’s a critical need, like a wheelchair-accessible house, while other times they’re on the verge of doing something optional but costly, such as adopting a child.

My problem with the show starts with how the participants are deceived immediately: The families are given the briefcase and told that the money is “all for you guys,” as Broome tells a couple in the second episode. This prompts tears and excitement. They realize how the money will help improve their lives, and I understood how much it really does mean to them. In a short period of time at the top of each episode, The Briefcase does establish why these are families in need.

After they’ve had some time to talk about how much the money will help them, the qualifier hammer drops. “The money’s yours. You can do anything you want with it. But along with the money is going to come a decision,” Broome says in episode two.

Just parse those sentences. You can do anything you want but you have to do all these things we tell you to do first. The strings attached to the briefcase are big enough to operate the Statue of Liberty as a marionette.

It’d be one thing to say, “We’re going to ask you to make a tough choice. Here’s some money you can keep or give away.” Giving them the money and then revealing the twist is just mean. I certainly had empathy for all the participants, though most of it came from the situation they’d been forced into, cameras watching their every move.

The series then layers on other gimmicks and restrictions:

Each of the first two episodes has at least one person whose immediate response is to give it all away. This is heartwarming and nice, and for a few moments I was impressed by their selflessness.

Then–and this probably says more about me than them–I got annoyed at their stupidity. Those who advocate for giving the money away do so based on a limited amount of selected information that convinces them the other family needs it more. The amputee veteran thinks it’s “greedy” to keep any of the money, which creates conflict with his wife, who I absolutely sided with. “You have to worry about your family first,” his crying wife says, suddenly thinking their family isn’t a priority to her husband.

The Briefcase is really effective at engaging us in these arguments and decisions. I was right there, judging them and their decision-making. Those moments feel especially raw and real.

But again, they’re Probst with a shovel. I couldn’t get beyond how they were manipulated into that position, and I felt gross for participating, never mind watching.

What the couples ultimately decide to do with the money is, you might suspect, the part where everything is redeemed and forgiven. I won’t give away the conclusions, but at the end of the first episode, I rolled my eyes, in part because I didn’t understand why they’d made the decisions they did. The second episode’s conclusion is more interesting, though the decisions remain somewhat of a mystery, even after they explain it.

To the show’s credit, the final meetings–at Union Station in Los Angeles, for some unspecified reason–are not entirely played as an “it was all worth it” moment. In the second episode, Broome appears on camera acknowledging the hell they’ve put both families through.

Besides taking the cast on an emotional journey, the editing does that to us, too, drawing out the moments when someone has made a decision. It’s tense and dramatic even when it’s just one of the non-binding decisions. Overall, the episodes move pretty quickly and the show looks good, adopting the same aesthetic that every other non-Survivor and The Amazing Race CBS reality series has. There’s also the swelling, generic music to tell you how to feel at each moment.

I imagine some people will enjoy those feelings. As someone who gets choked up every time I watch this commercial (okay, cries; I just watched it again), I’m open to being manipulated emotionally by corporations.

But people–especially people in need–are not playthings to be involuntarily manipulated by corporations or Hollywood producers. The Briefcase‘s central premise is something I find to be unacceptable, in the same way I object to the hidden camera show What Would You Do. When John Quiñones shows up to judge the unsuspecting people he and the show just manipulated, hiding behind phony concern for some progressive ideal they’re co-opting as justification, I always hope the outcome will be a lawsuit for intentional infliction of emotional distress.

I don’t want to watch intentional infliction of emotional distress, especially not on people who haven’t volunteered for that. Thus, The Briefcase has nothing in it for me.