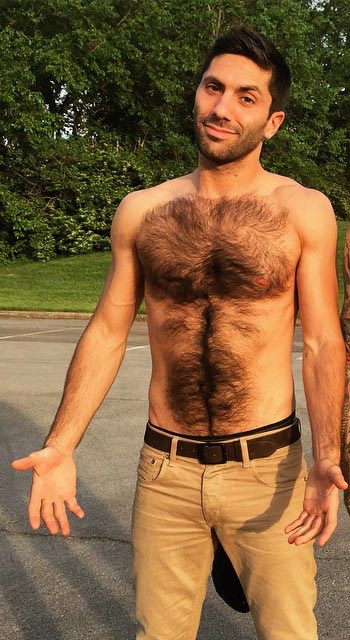 Catfish star Nev Schulman is giving away his chest hair, pictured here from his Instagram account, to someone who gives $20,000 to charity.

Catfish star Nev Schulman’s chest hair is so famous it has several Twitter accounts dedicated to it. Now, you can own a piece–or several pieces–of documentary film and reality television history for just $20,000.

That’s the reward for a $20,000 donation to the charity Leave Out Violence. (The “cause marketing” platform on which the chest hair is avaialble, Goraff, says it takes “5-20% of net proceeds depending on the type, size, duration and brand sponsorship of the campaign,” so not all of your money will go to the charity.)

It’s not clear how much chest hair you’ll receive for your $20K, but it is clear that Nev understands its appeal. The description of the reward says:

“It doesn’t get any better than this, the ultimate Nev souvenir: his glorious chest hair! It’s what makes you call him Daddy, squeal when you see him shirtless, and what inspired @Nevschesthairs and the fan page Nev Schulman’s Chest Hair.”

This isn’t the grand prize, though; that’s a day-long behind-the-scenes visit with Max and Nev on the set of the MTV show. “I’ll let you even hold my little camera,” Max says in the video below.