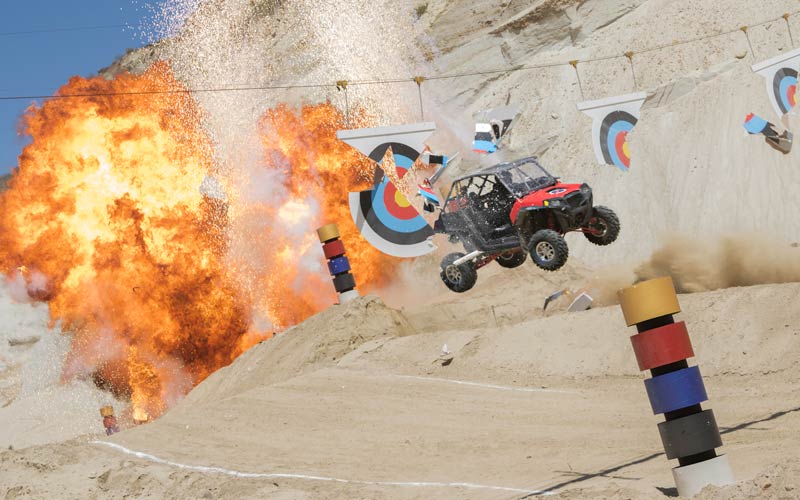 This is Fear Factor, stripped down to just the biggest and most fun challenges–which, yes, is a not-insignificant change, considering Fear Factor was cancelled shortly after NBC decided not to air a semen-drinking stunt.

After the first challenge, Bullseye even abandoned the bullseye conceit, using bullseyes instead as objects to be smashed or grabbed. The preview of other challenges this season shows them basically replacing Fear Factor’s flags:

Along with Wipeout, all three shows are Endemol productions, but Bullseye is, again, much closer to NBC’s series. It even shares key crew members with Fear Factor: co-executive producers Shye Sutherland and Kevin Wehrenberg, and director Rupert Thompson.

Yes, there’s nothing gross to eat here, nor do contestants express much anxiety about doing any of these. Also, Kellen Lutz is no Joe Rogan, and he’s so flat he actually kind of made me miss Joe’s combination of detachment and enthusiasm.

Godfrey, the co-host who explains the challenges and interviews the contestants, is more lively but mostly his job is to waste time before the challenge starts. But there was one brilliant comedic moment when, during the intro of the second challenge, Kellen threw to Godfrey, who it turned out was standing just a few feet behind him. More of that, please.

All that said, the first hour was a lot of fun. I think it could have been compressed into a half hour pretty easily, since the first challenge alone took 30 minutes and it wasn’t really strong enough to justify that much time and that many act breaks.

The final challenge was by far the best, with contestants racing around a course trying to smash targets, some of which were moving. Even better, the course dropped off, creating air time and the possibility for their vehicle to flip. That’s what I want from these kinds of shows: lots of safe, crazy stunts that look like a blast to do.

After one episode, Bullseye feels like a solid reboot of Fear Factor, some light summer fun that goes well with a fast-forward button.