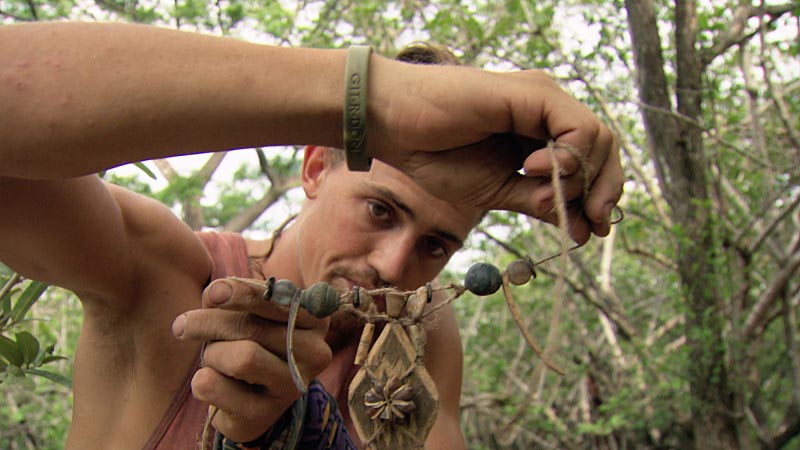 For a brief moment after the reward challenge on Survivor Worlds Apart, there was some genuine, joyous levity. Following a slapstick-filled obstacle course on the water that led to many painful-looking falls and penguin slides down wood ramps, Mike and the other reward challenge winners went off to make a Snickers commercial.

The losing team went back to camp. Jenn sulked as her tribe killed another chicken–have they still not eaten the rooster?!–and told the camera, “I’ve got nothing out here, except for despair.”

But seconds later of television time, she was laughing hysterically. So were Will, and Carolyn, and Joe–and me. That’s because Rodney was doing an exceptional impression of Mike. He didn’t just have Mike’s voice down, but he also nailed the kinds of things Mike says. It was honestly better than many SNL celebrity impressions. Then Rodney seamlessly switched to an impression of Dan that was equally on point. Rodney may not get more zeroes in his bank account by playing Survivor, but I think this could be another path to zeroes.

And then this season went back to sucking, as one of the last remaining hopes for a non-awful winner was voted out.

Joe didn’t leave without trying: He created a rather credible fake idol out of things he’d been stashing, and tried to trade that to Mike for his vote. I’m not quite sure why he agreed to give it away before Tribal Council instead of just holding on to it to keep using it as a weapon in the event Mike actually did keep his word. But I did enjoy when Jeff Probst refused Mike’s request to validate the fake idol.

Voting off Joe made the most sense: he’s been a challenge beast and voting for him to win wouldn’t cause the same kind of dry heaving that would result from voting for most of the other remaining players. This week, he lost immunity, so this was their chance. Shirin did kick around the idea of using the split vote to send Jenn home instead, since Jenn was basically begging to be voted out. But the end result was that Shirin stuck with Mike, whose alliance of blue collars voted out their biggest threat.

At some point during the episode, Jenn said, “This would suck less if the people sucked less.” That’s a much more succinct way of saying what I wrote about last week. For a brief moment both the cast and the editors showed that this season was capable of not sucking, but–especially based on next week’s preview–Survivor Worlds Apart just seems like it’s on a path to doubling down on its sucking.